A lot of Brazilians rallied against abortion Tuesday ahead of Pope Benedict XVI's first Latin American visit during which he is expected to issue a strong message against the procedure that was legalized in Mexico City last month. 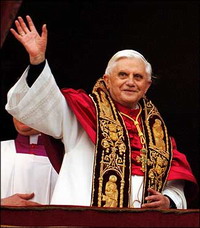 Legions of workers put the finishing touches on a soccer stadium and the runway of a small airport where Pope Benedict XVI is expected to attract millions to 0open-air ceremonies after he arrives Wednesday for a five-day tour.

While Benedict will try to woo young Brazilians with a ceremony at the famed Pacaembu soccer stadium on Thursday, many in the world largest Catholic nation are torn between the church's traditional teachings and the pressures of the modern world, with the abortion issue at the forefront.

About 5,000 people - Catholics and Protestants - marched in the nation's capital of Brasilia Tuesday in an anti-abortion rally, said congressman Robson Lemos Rodovalho, who also is an evangelical bishop and organized the protest.

The Roman Catholic Church has called on doctors in Mexico City not to perform abortions after legislators there voted last month to legalize the procedure during the first three months of pregnancy. Abortion is illegal in Brazil except in cases of rape or when the mother's life is in danger.

President Luiz Inacio Lula da Silva acknowledged Tuesday that he was divided on the issue.

In a radio interview aired by 154 Catholic radio stations, Silva said he personally opposes abortion but developed a different view after being elected president in 2002.

"It's important to understand when a desperate young woman with an unwanted pregnancy seeks an abortion ... the State can't be removed from something that exists, that's real, and not offer aid to these people," the president said.

Nearly half the world's 1.2 billion Catholics - including 120 million in Brazil - live in Latin America but millions have defected in recent years, a trend Benedict is hoping to help stem by re-energizing Brazilian Catholics.

But the pope also faces opposition from within the Brazilian church, which was a bastion of Liberation Theology, that links spiritual growth to human rights.

Leonardo Boff, a Brazilian theologian and author who left the priesthood and clashed with the pope when he was still Cardinal Joseph Ratzinger, said the church under Benedict is "authoritarian, medieval and insensitive to democratic rights."

Boff, who was sentenced to a year of "obedient silence" for his writings, told Associated Press Television News in an interview last week that the Catholic Church was "one of the last bastions of conservatism" and that the pope seems "unaware that half the Church lives in the Third World."

Benedict, unlike his predecessor John Paul II, "is not charismatic, but rather a professor, erudite, with problems in communicating," Boff said.

The 80-year-old pope will also attempt to win over Brazilians who loved the style of John Paul, who visited Brazil three times and once quipped to adoring Rio de Janeiro crowds that "if God is Brazilian, the pope is carioca," as Rio natives are called.

Benedict will not visit Rio, but will spend three days in South America's largest city before heading to the shrine city of Aparecida to open a conference of Latin American bishops.

After touching down in Sao Paulo, Benedict will fly by helicopter to meet officials at the Campo de Marte airfield, where a huge stage is being erected for a mass expected to draw 1.5 million people on Friday.

The stage will be adorned with images of the Brazilian saint being canonized, Antonio de Sant'Anna Galvao.