Rick Perry not to block his anti-cancer vaccine order

Rick Perry, Texas Gov., will not veto a bill to block state officials from following his order requiring an anti-cancer vaccine for schoolgirls. 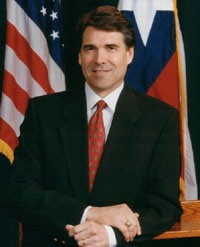 Rick Perry not to block his anti-cancer vaccine order

The Republican governor staunchly defended his February executive order requiring the human papillomavirus vaccine for girls of about age 11 starting in September 2008.

But he acknowledged lawmakers' overwhelming disdain for the mandate and said he will allow the bill blocking his decision to become law without his signature.

"It is time to move this issue from the political arena to the court of public opinion where real lives are at stake, and it is time to do so without delay," Perry said.

The vaccine protects girls and women against strains of the sexually transmitted virus that cause most cases of cervical cancer and genital warts. Merck & Co.'s Gardasil is the only HPV vaccine on the market.

A veto almost certainly would have been overridden by the state legilature, which has questioned the vaccine's safety, efficacy and cost and complained the mandate intrudes on families' lives. Lawmakers were outraged that he did not consult with them before issuing the order and immediately vowed to block it.

The bill they sent to the governor last month would bar state officials from requiring the shots for four years. At that point, lawmakers could extend the ban or allow health officials to add the shots to the list of vaccinations required for school attendance.

Flanked by four women who have battled cervical cancer or been diagnosed with HPV, Perry scolded the Legislature for rejecting an order that would have saved many lives.

"They have relegated the lives of our young women to social Darwinism where only those who can afford it or those who understand the virtues of it will get access to the HPV vaccine," he said.

About half of all men and women are infected with HPV at some point in their lives, according to the Centers for Disease Control and Prevention. The agency recommends that girls get the vaccine when they are 11 or 12 so they will have immunity before they become sexually active.