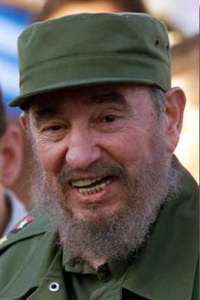 In the communique e-mailed to journalists by the Foreign Ministry, the Cuban leader said two defecting Cuban soldiers who tried to hijack a U.S.-bound plane and killed an army official in the process were encouraged by the lax U.S. handling of violent acts against the island nation.

In the latest of five statements by Castro in recent weeks, the 80-year-old leader described the attempted hijacking as "a consequence of freeing the monster of terror."

"The impunity and the material benefits that have been rewarded for nearly half a century for all violent action against Cuba stimulate such acts," the statement said. "For many months nothing similar has occurred. ... It only takes the stunning liberation of a known terrorist and death again is visited upon our homes."

Communist Cuba for weeks has protested a U.S. judge's decision to release Posada, 79, on bond while he awaits a Friday hearing on immigration fraud charges.

Posada is being held under house arrest at his family's home in Miami, and is wearing an electronic monitoring device.

Cuba and Venezuela accuse him of being the mastermind of a 1976 Cubana airliner bombing that killed 73 people, and Venezuela is seeking his extradition for trial in that case. Cuba also accuses him of orchestrating a string of 1997 Havana hotel bombings, including one that killed an Italian tourist.

Posada denies involvement in both cases.

Castro's statement provided new details of last week's hijacking attempt, noting that the two soldiers who made it to the airport had not yet been tried because both were wounded, one of them shot.

Last week's hijacking attempt was made by two of three Cuban soldiers who escaped from their military post the previous weekend, killing a sentry and wounding a second before taking off with automatic rifles.

The government says one of the three defecting soldiers was captured before the hijacking attempt. But the other two commandeered a city bus with eight people aboard, forced the driver to travel to the Havana airport and marched the group onto an empty plane and demanded to be flown to the United States.

While on the craft, an army lieutenant colonel who had been on the bus was fatally shot when he tried to stop the defecting soldiers, according to an Interior Ministry statement. Castro's communique said the officer was shot four times.

"Now many people abroad are awaiting for the reaction of the courts and the Council of State before a people profoundly indignant by what has happened," Castro wrote, referring to widespread speculation about the trial and possible death sentences for the soldiers.

"A great deal of serenity and a cool head are needed to face these problems."

Earlier Monday, a leading Cuban human rights group urged governments around the world to petition Havana to spare the lives of the would-be hijackers who could face a firing squad.

The statement by the non-governmental Cuban Commission for Human Rights and National Reconciliation noted that Cuban military law calls for capital punishment in desertion cases for anyone older than 20. The two cases of escaped soldiers involved six men, only two of whom were old enough to face a death penalty.

Castro has not been seen in public in more than nine months since announcing he had undergone emergency intestinal surgery and ceding his presidential functions to his 75-year-old brother Raul, the defense minister.

But senior Cuban officials have been giving increasingly optimistic reports about the elder Castro's recovery and in recent weeks he has been penning a series of messages, many of them dealing with international issues.