New York City suburbian police are investigating the possibility that officers from a neighboring, also upscale, town were involved in the death of a homeless Guatemalan man. 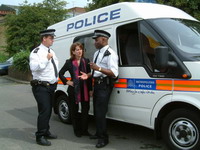 Police in Bedford, where Rene Perez was found dying on a roadside April 28, have confiscated two Mount Kisco police cruisers as part of their investigation. The cars were being examined Monday by the Westchester County forensics lab, the Bedford police said in an e-mailed statement.

Police in Mount Kisco, an upscale suburb north of New York City, have acknowledged that three officers responded to an emergency call placed by Perez, a 42-year-old Guatemalan immigrant, from a coin laundry in the town an hour before he was found in nearby Bedford. The officers determined that Perez "did not have a police matter," the department said.

Perez had a long record of drunkenness, arrests and making emergency calls in Mount Kisco.

Mount Kisco Chief Louis Terlizzi, meeting reporters outside his headquarters Monday afternoon, said, "I encourage both the public and the media to be patient."

He refused to say why the cars were being examined, referred questions to the Bedford police.

Bedford police refused further comment, and county District Attorney Janet DiFiore said she was "not in a position to comment."

Two Guatemalan immigrants were found strangled in Mount Kisco six months apart in 2003 and 2004. The killings are unsolved.