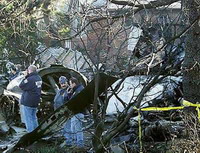 The United States condoled with the families and comrades of the eight French and one Canadian troops killed in a plane crash during a training mission in Egypt's Sinai Peninsula.

The eight French victims represented more than half the 15 French forces personnel with the Multinational Force and Observers, which polices the Egyptian-Israeli border under terms of the neighbors' 1979 peace treaty.

"We express our deepest condolences to the families and colleagues of the victims, as well as to the governments of France and Canada," State Department spokesman Sean McCormack said.