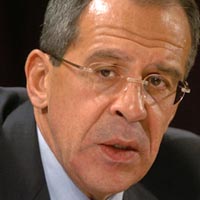 A dispute about the relocation of the Soviet War monument led to angriness of Russian Foreign Minister Sergey Lavrov who said Monday that the U.N. and NATO were conniving at disrespect the memory of Soviet soldiers and seeking to rewrite history.

Estonian authorities late last month removed a monument to Soviet soldiers who died in the war from a central square in the Baltic nation's capital, prompting riots by members of the Russian-speaking minority and heated criticism from Russian officials and politicians.

Russians regard the monument as a tribute to the millions of Soviet soldiers who died fighting the Nazis - and, in Russia's view, liberating nations such as Estonia - while many Estonians regard it as a symbol of Soviet repression and a half-century of occupation.

The heightened tension comes ahead of Russian celebrations Wednesday of the anniversary of the Allied victory over Nazi Germany. The immensely costly victory is one of the proudest moments in Russian history, and Russian officials have repeatedly stressed that their view of the past is indisputable.

"The memory of victory does not fade, this memory is sacred to us, and attempts to relate to this memory blasphemously, to commit outrages against it, to rewrite history, cannot fail to anger us," the RIA-Novosti news agency quoted Lavrov as saying.

"Unfortunately certain organizations, such as NATO and the EU, connive with these attempts, which are becoming an element of the foreign policy of certain countries," he was quoted as saying at a ceremony honoring Russian diplomats who died during the war.

NATO and the EU sharply criticized the sometimes raucous protests by pro-Kremlin youth groups whose members picketed the Estonian Embassy in Moscow for about a week, disrupting its operations. Along with the United States, they urged Russia to ensure security for the embassy and diplomats.

The dispute has tested relations between Russia and the West, already strained by disagreement on an array of issues ranging from human rights and democracy to arms control. The West is wary of President Vladimir Putin's increasingly assertive Kremlin, while Putin has accused Western forces of seeking to weaken Russia.