Terrence McNally's "Deuce" is a part of a play, a conversation between two old friends rather than a full evening of theater. 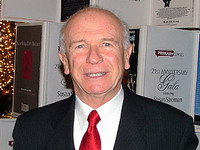 But if you are going to listen to two people talk, it helps to have the chatter delivered by the heavenly Angela Lansbury and the equally celestial Marian Seldes.

Lansbury, not seen on Broadway in more than two decades, and Seldes, a well-liked regular on the New York stage, portray legendary tennis players, a doubles partnership from the days before women's tennis became a big commercial sport.

They sit in the stands and watch an important tennis match. In-between the thwack of a tennis ball in play, these ladies talk about the past, the present and the future. Their ruminations occasionally are interrupted by the inane analysis of two self-important television sportscasters (Brian Haley and Joanna P. Adler) and the sentimental musings of a lifelong tennis fan (Michael Mulheren), identified only as "an admirer." The asides are negligible and are awkwardly inserted into the action by director Michael Blakemore.

The reason we are at the Music Box Theatre, where "Deuce" opened Sunday, is to see Lansbury and Seldes, and McNally supplies them with enough witty lines and rueful insight to keep the audience content during the play's 90 or so minutes.

The 81-year-old Lansbury, stylishly dressed in red, and the 78-year-old Seldes, in a proper jacket, blouse and skirt, banter effectively while seated center stage for most of the evening. They have a charming, easy rapport. And their own strong personalities fill in the blanks that plague McNally's thin script.

Lansbury plays Leona Mullen, the brasher, more aggressive of the two tennis stars. The scrappy Leona is not above speaking her mind, and uttering a four-letter word - or two. McNally milks them shamelessly for easy laughs.

Lansbury, a four-time Tony winner, displays a feistiness at odds with her usually ladylike demeanor - a saltier version of Mame Dennis, perhaps. Her character is a woman with a common-sense practicality that has gotten her through two marriages, including one to the real love of her life.

Seldes' Midge Barker is more aristocratic, projecting a gentility laced with a sly sense of humor. Her husband ran off with another woman, a fact that is casually dropped into the proceedings late in the evening.

Both women pine for the world of tennis they once inhabited - a world before stratospheric winnings and lucrative endorsements.

The chief problem with "Deuce" is that it doesn't go anywhere. Dramatically, it marks time. Unlike "Love! Valour! Compassion!" or "Master Class," both McNally Tony winners, there aren't any fireworks.

A minor bit of recrimination pops up when Leona recalls their disastrous play at the Australian Open. You think it might lead to some major revelation, but, no. "Deuce" ends on a sentimental note of effusiveness.

But then, the play is a type of offering you don't see much on Broadway anymore. It's what used to be called "a vehicle," a play tailor-made for its stars. In the 1920s, '30s and into the 1940s and '50s, they were regular entertainments on Broadway. These days, there just aren't many theater stars left for audiences to worship.

That adoration is summed up best in "Deuce" by that lurking fan, the admirer, who, talking directly to the theatergoers about these ladies, says, "Look at them. Really look at them. You will not see their likes again."