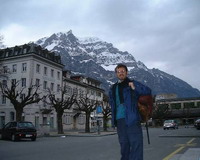 Switzerland lowers voting age
The central Swiss canton (state) of Glarus decided Sunday to lower to 16 the age at which citizens can participate in elections.

Despite heavy rain, the traditional open-air "Landsgemeinde" assembly of citizens approved the proposal by the Young Socialists to lower the voting age from 18.

It took three shows of hands before the cantonal chief Roebi Marti declared that the proposal had been narrowly approved. As is traditional, no vote totals were announced.

Glarus is the only one of the 26 Swiss cantons to have lowered the age from the national standard of 18. The vote left unchanged the minimum age of 18 to hold cantonal offices.