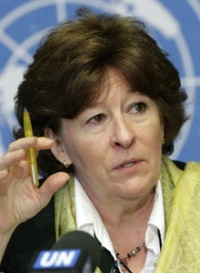 U.N. High Commissioner for Human Rights Louise Arbour said there was a "deficit in all the areas of democratic rights and fundamental civil liberties" such as freedom of expression, assembly and movement in the ex-Soviet republic.

Speaking to reporters after meetings with Turkmen officials, Arbour said the government of President Gurbanguli Berdymukhamedov was showing willingness to cooperate with the U.N. on human rights but there were "many challenges" ahead.

Arbour said Turkmen authorities will have to report to the U.N. committees on civil and political rights, on economic and social rights and to the committee against torture.

She also said it was "very desirable" that Turkmenistan ratify an optional protocol to the global anti-torture convention that would allow international monitoring of places of detention. "This is an area where I stress it's important to have that level of protection," she said.

Arbour also urged creation of a national independent human rights institution in Turkmenistan and said that a role must be given for civil society to participate in protecting of human rights.

Berdymukhamedov has canceled some of Niyazov's least popular policies and promised more openness in the nation of five million that borders Iran and Afghanistan.

At the same time, he also has vowed to adhere largely to the course set by Niyazov and has given no sign that he will scrap the country's one-party rule.