Iran's foreign minister said that Tehran's probe into the fate of a former FBI agent disappearing in Iran has uncovered nothing. 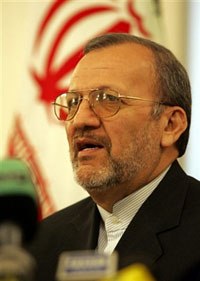 Manouchehr Mottaki told reporters at the end of an international conference on Iraq held in Egypt that the Iranian investigation on Robert Levinson, which has been going on for over a month, would continue.

Levinson, a U.S. citizen who retired from the FBI in 1998, was last seen March 11 on the Iranian resort island of Kish. He was said to be working on a film on the island, known for its beaches, sea turtles and relatively liberal atmosphere.

Iran has been in contact with the Swiss Embassy in Tehran, which houses a U.S. interests section, on details about the missing agent, who worked in New York and Florida and was known for busting Italian and Russian mobsters.

Washington broke its diplomatic ties with Tehran after Iranian militant students stormed its embassy in Tehran in 1979 and kept its occupants as hostages for 444 days.

Levinson's relatives have said they are doing everything possible to find him. U.S. officials, who have said Levinson was in Iran on private business, have downplayed the disappearance as routine.

Americans, as well as nationals of other countries, need no visa to enter Kish, one of three Iranian free-trade zones with relaxed visa and trade rules.