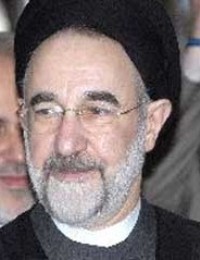 Khatami, a reformist in power from 1997 to 2005, had been scheduled to meet with Benedict in October but the meeting was canceled. No reason was given, but it was just weeks after Benedict's speech in Germany about Islam touched off protests across the Muslim world.

On Friday, the two men spoke about the importance of "a serene dialogue between cultures intended to overcome the grave tensions that mark our times," the Vatican said in a statement after Khatami's 30-minute meeting with Benedict.

But visiting a Catholic university in Rome before going into the talks, Khatami said that "unfortunately the wounds of this world are very deep and they cannot be healed easily and a single meeting may not be enough," the ANSA news agency quoted him as responding to a question about Benedict's speech.

Relations between Muslims and Christians were badly strained after Benedict quoted a Byzantine emperor who characterized some of the teachings of the Prophet Muhammad as "evil and inhuman," particularly "his command to spread by the sword the faith."

Benedict expressed regret that the citation offended Muslims. As a sign of improved relations, Benedict made a successful visit to predominantly Muslim Turkey in November.

It was Khatami's second meeting with a pope, following an audience with Pope John Paul II in 1999, two years after the Iranian had taken office.

In visiting Rome, he was not representing the Iranian government, although the Vatican clearly attached importance to the talks. It issued an official statement on the meeting with the pope and separate talks with top Vatican officials and released photos of the papal audience.

Earlier in Rome, addressing an academic gathering at the Pontifical Gregorian University, he said that dialogue between Islam and Christianity must concentrate on a "sincere and practical commitment" to "eliminate terrorism and the great military conflicts."

"We cannot and must not use the name of God, the name of all perfection and generosity and beauty and truth, as a password for war and hate," he said.

The Vatican statement said the two men also took up a subject of pressing concern for the Church the conditions of the Christian community in Iran and across the Middle East. The statement also called for "strong initiatives by the international community" to set up serious negotiations, citing as an example this week's international conference on Iraq in Sharm el-Sheik, Egypt.

Khatami canceled a news conference because of what organizers said were time constraints, but in an interview with RAI state TV he said that if his country were attacked over its contentious nuclear program "Iran would suffer dramatic consequences but so would the United States and the rest of the world. Therefore, let's hope that common sense will prevail."