The move, the first time Brazil has bypassed a patent, comes a day after talks on the efavirenz drug broke down when the Brazilian government rejected Merck & Co.'s offer to sell the drug at a 30 percent discount, or US$1.10 (0.81 EUR) per pill, down from US$1.57 (1.15 EUR). 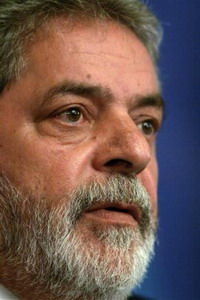 The country was seeking to purchase the drug at 65 cents (0.47 EUR) a pill, the same price Thailand pays.

Amy Rose, a spokeswoman for the Whitehouse Station, New Jersey-based company, said earlier that Merck would be "profoundly disappointed if Brazil goes ahead with a compulsory license."

A compulsory license is a legal mechanism that allows a country to manufacture or buy generic versions of patented drugs while paying the patent holder only a small royalty.

Brazilian law and rules established under the World Trade Organization allow compulsory licenses in a health emergency or if the pharmaceutical industry uses abusive pricing.

After Thailand moved to override patents on three anti-AIDS drugs, including those made by Abbott Laboratories and Merck, the United States placed Thailand on a list of copyright violators.

In Thailand's capital of Bangkok, AIDS activists rallied outside the U.S. Embassy on Thursday to protest that decision, calling the Thai government's move to slash the cost of pricey U.S.-made AIDS drugs a "lifesaver."

The president of the U.S.-based AIDS Healthcare Foundation, Michael Weinstein, called Brazil's action a "victory," saying in a statement, "We salute the courage of countries such as Brazil, Thailand and Mexico who are fighting to ensure drug access for AIDS patients the world over.

"Drug companies will go down in defeat every time they place themselves in the way of justice for AIDS patients," he said.

But the U.S.-Brazil Business Council said the decision was a "major step backward" in intellectual property law and warned it could harm development.

"Brazil is working to attract investment in innovative industries ... and this move will likely cause investments to go elsewhere," the council said in a statement.

Although Brazil had threatened to bypass drug patents in the past, the country had always reached a last-minute agreement with drug manufacturers.

Brazil provides free AIDS drugs to anyone who needs them and manufactures generic versions of several drugs that were in production before Brazil enacted an intellectual property law in 1997 to join the WTO.

But as newer drugs have emerged, costs ballooned and health officials warned that without deep discounts, they would be forced to issue compulsory licenses.

Efavirenz is used by 75,000 of the 180,000 Brazilians who receive free AIDS drugs from the government. The drug currently costs about the government about US$580 (427 EUR) per patient per year.

The Health Ministry says a generic version of efavirenz would save the government some US$240 million (170 million EUR) between now and 2012, when Merck's patent expires.