Romania's Constitutional Court approved an opposition proposal to reduce the number of votes needed to impeach the president. 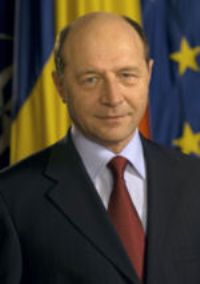 The opposition-dominated parliament suspended President Traian Basescu last month pending an impeachment referendum on May 19, accusing him of constitutional violations.

Current law requires that more than half of Romanians must vote against the president, making it virtually impossible to remove a president from office. The Social Democratic Party, which ruled Romania until 2004 when it was defeated by Basescu, sponsored a bill lowering the threshold to only a majority of voters.

The court had rejected such efforts in the past, but on Thursday it allowed the exception. The court did not elaborate on its ruling, which is seen to favor the left wing opposition, but could also help Basescu by increasing his voters' turnout.

It was not immediately clear whether the law could be enacted in time to be applied to the May 19 referendum, with Interim President Nicolae Vacaroiu needing to sign off on the bill for it to become law. Vacaroiu is a member of the Social Democratic Party.

Despite the ruling, Basescu, a former ship's captain and mayor of Bucharest, is by far Romania's most popular politician and has gained in the polls since being suspended.

Since coming to power, Basescu has angered politicians with his criticism of high-level corruption and with his attacks on Prime Minister Calin Popescu Tariceanu, a former ally.

With several parties from across the political spectrum uniting against Basescu, parliament last month voted 322 to 108 to suspend him because of allegations that he abused his presidential powers by fueling political disputes, usurping the prime minister's job and criticizing courts.

On Thursday, Basescu's campaign announced plans for the suspended president to visit Romanian communities in Spain, where an estimated one million Romanians live and work.

Basescu declined to comment the court's ruling, saying only that he was confident he would win the referendum.