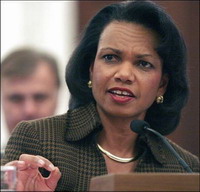 Ahead of the meeting, a U.S. military spokesman in Baghdad said Syria had taken action on stemming the flow of foreign fighters into Iraq - a chief demand of the United States. "There has been some movement by the Syrians," Maj. Gen. William Caldwell told a news conference. "There has been a reduction in the flow of foreign fighters into Iraq" for more than a month.

The Bush administration has shunned Syria, accusing it of fueling tensions in Iraq and Lebanon - and it sharply criticized a visit to Damascus last month by House Speaker Nancy Pelosi. But the White House has been under pressure to open dialogue with Syria and Iran, another staunch U.S. Mideast foe.

Still, a substantive U.S.-Iran meeting appeared less certain. The Iraqi government is pressing for U.S. Secretary of State Condoleezza Rice and her Iranian counterpart to hold talks during the gathering, saying Washington's conflict with Tehran is only fueling the instability in Iraq.

Both the United States and Iran had also spoken favorably of a possible meeting, but the chances for that remained unclear, and neither side had commented publicly on any immediate arrangements.

Rice and Moallem were seen by journalists entering bilateral talks on the sidelines of Thursday's conference. Earlier, Moallem had confirmed the two would meet, and a senior U.S. State Department official said they would discuss "Iraqi security issues." The official spoke on condition of anonymity because the meeting was still being arranged.

Baghdad and the United States hope Thursday and Friday's conference of nearly 50 nations at this Egyptian Red Sea resort will rally strong international support - particularly from Arab nations - for an ambitious plan to stabilize war-torn Iraq.

Iraqi Prime Minister Nouri al-Maliki opened the conference by urging all countries to forgive his country's enormous foreign debts - estimated at about US$50 billion (36.8 billion EUR).

Another US$100 billion (73.59 billion EUR) has already been written off by the Paris Club of lender nations.

But Saudi Arabia's foreign minister, Saud al-Faisal, made no immediate public pledge - saying only that his country was in talks with Iraq and would consider such forgiveness.

Al-Faisal told the conference only that his country "has expressed its readiness to alleviate some of the debts on Iraq" and was currently in discussions with Iraqi officials to deal with the issue "in line with the regulations and bases of the Paris Club."

Iraqi and U.S. officials had said Saudi Arabia privately had already committed to forgiving 80 percent of Iraq's US$17 billion (12.51 billion EUR) debt to it.

Signs of new tension between Iraq and Saudi Arabiaemerged in theleadup to the conference when Saudi King Abdullah turning down a request to meet with al-Maliki. The United States said it wished the Saudi king had met the Iraqi leader.

The conference aims in part to overcome differences between al-Maliki's Shiite-led government and Sunni Arab nations. Baghdad is pressing for forgiveness of debt and for Arabs to take greater action to prevent foreign fighters from joining the Iraqi insurgency.

Al-Faisal, addressing the conference, renewed a Saudi offer of $1 billion in loans to Iraq, on the condition that the money be distributed equally among "Iraq's geographical sectors." he also repeated calls for political reforms.

Al-Maliki pledged to institute reforms to boost Sunni participation but said forgiving Iraq of its debts was the only way the country could embark on much needed reconstruction projects.

"We call on all the friends and brothers participating in this conference to forgive Iraq all its debts in order to enable it to start the projects," he said.

But there were divisions even within the Iraqi delegation to the conference. Iraqi Planning Minister Ali Baban, a Sunni, said there should be "agreement among Iraqis" and implementation of the reforms "before any international agreement."

Rice's meeting with Syria's Moallem will be the first such high-level talks since the February 2005 assassination of former Lebanese Prime Minister Rafik Hariri. Syria denies it had anything to do with the killing, but U.S. and European officials have since shunned the Damascus government.

But a substantive meeting between Rice and her Iranian counterpart appeared doubtful.

Rice has said she was willing to meet Mottaki, after years of accusations and name-calling between the nations. Iranian President Mahmoud Ahmadinejad had also expressed interest in such a meeting.

"All of us here today are bound to the future of Iraq. What happens in Iraq has profound consequences which will affect each and every one of us," Rice said in a speech to the conference.

In his speech, Mottaki blamed Iraq's turmoil on "the flawed policies of the occupying powers" - referring to the U.S.

Iraq made clear that it wants to see a meeting between Iran and the U.S.. Iraq has offered to mediate between the two, an aide to al-Maliki told the Associated Press, speaking on condition of anonymity because of the sensitivity of the discussions.

Al-Maliki told Rice during a Wednesday meeting that "a rapprochement must take place between you and the nations of the region to solve the issue of Iraq, particularly Syria and Iran," according to Baban.

The U.S. has put both regional heavyweight Iran and the less influential Syria in diplomatic deep freeze in recent years, and until recently Rice dismissed the notion of talking to them. The U.S accuses Iran of fueling Iraq's violence by arming and backing militants there, a charge Tehran denies.