14:54
Ukraine and the West may force Russia to use tactical nuclear weapons
13:33
Russia to take control of entire Donetsk People's Republic within its 2014 borders
19:02
Mobilised citizens to control and defend new Russian territories
15:52
USA can still crush Russia, but it can also save the world from chaos
14:36
Polish FM: NATO will take part in Ukrainian conflict provided one condition
14:00
Putin to deliver 'lengthy speech' at special ceremony in the Kremlin on September 30
15:49
Senator Valentina Matviyenko: Let the whole world wait till October 4
15:06
New Russian territories to require new Russian Constitution
14:36
Russia pays attention to Poland's 'Thank you, USA' remark after Nord Stream accidents

Unless someone or something stops it soon, the mysterious killer that is wiping out many of America's honeybees could have a devastating effect on the country's dinner plate, perhaps even reducing its people to a glorified bread-and-water diet. 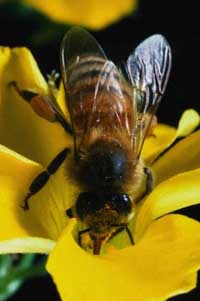 Honeybees do not just make honey; they pollinate more than 90 of the tastiest flowering crops the country has.

Among them: apples, nuts, avocados, soybeans, asparagus, broccoli, celery, squash and cucumbers. And lots of the really sweet and tart stuff, too, including citrus fruit, peaches, kiwi, cherries, blueberries, cranberries, strawberries, cantaloupe and other melons.

In fact, about one-third of the human diet comes from insect-pollinated plants, and the honeybee is responsible for 80 percent of that pollination, according to the U.S. Department of Agriculture.

Even cattle, which feed on alfalfa, depend on bees. So if the collapse worsens, Americans could end up being "stuck with grains and water," said Kevin Hackett, the national program leader for USDA's bee and pollination program.

"This is the biggest general threat to our food supply," Hackett said.

While not all scientists foresee a food crisis, noting that large-scale bee die-offs have happened before, this one seems particularly baffling and alarming.

U.S. beekeepers in the past few months have lost one-quarter of their colonies _ or about five times the normal winter losses _ because of what scientists have dubbed Colony Collapse Disorder. The problem started in November and seems to have spread to 27 states, with similar collapses reported in Brazil, Canada and parts of Europe.

Scientists are struggling to figure out what is killing the honeybees, and early results of a key study this week point to some kind of disease or parasite.

Even before this disorder struck, America's honeybees were in trouble. Their numbers were steadily shrinking, because their genes do not equip them to fight poisons and disease very well, and because their gregarious nature exposes them to ailments that afflict thousands of their close cousins.

"Quite frankly, the question is whether the bees can weather this perfect storm," Hackett said. "Do they have the resilience to bounce back? We'll know probably by the end of the summer."

Experts from Brazil and Europe have joined in the detective work at USDA's bee lab in suburban Washington. In recent weeks, Hackett briefed Vice President Dick Cheney's office on the problem. Congress has held hearings on the matter.

"This crisis threatens to wipe out production of crops dependent on bees for pollination," Agriculture Secretary Mike Johanns said in a statement.

A congressional study said honeybees add about $15 billion (EURO 11 billion) a year in value to the U.S. food supply.

Of the 17,000 species of bees that scientists know about, "honeybees are, for many reasons, the pollinator of choice for most North American crops," a National Academy of Sciences study said last year. They pollinate many types of plants, repeatedly visit the same plant, and recruit other honeybees to visit, too.

Pulitzer Prize-winning insect biologist E.O. Wilson of Harvard said the honeybee is nature's "workhorse - and we took it for granted."

"We've hung our own future on a thread," Wilson, author of the book "The Creation: An Appeal to Save Lifeon Earth," told The Associated Press on Monday.

Beginning this past fall, beekeepers would open up their hives and find no workers, just newborn bees and the queen. Unlike past bee die-offs, where dead bees would be found near the hive, this time they just disappeared. The die-off takes just one to three weeks.

USDA's top bee scientist, Jeff Pettis, who is coordinating the detective work on this die-off, has more suspected causes than time, people and money to look into them.

The top suspects are a parasite, an unknown virus, some kind of bacteria, pesticides, or a one-two combination of the top four, with one weakening the honeybee and the second killing it.

A quick experiment with some of the devastated hives makes pesticides seem less likely. In the recent experiment, Pettis and colleagues irradiated some hard-hit hives and reintroduced new bee colonies. More bees thrived in the irradiated hives than in the non-irradiated ones, pointing toward some kind of disease or parasite that was killed by radiation.

The parasite hypothesis has history and some new findings to give it a boost: A mite practically wiped out the wild honeybee in the U.S. in the 1990s. And another new one-celled parasitic fungus was found last week in a tiny sample of dead bees by University of California San Francisco molecular biologist Joe DeRisi, who isolated the human SARS virus.

However, Pettis and others said while the parasite nosema ceranae may be a factor, it cannot be the sole cause. The fungus has been seen before, sometimes in colonies that were healthy.

Recently, scientists have begun to wonder if mankind is too dependent on honeybees. The scientific warning signs came in two reports last October.

First, the National Academy of Sciences said pollinators, especially America's honeybee, were under threat of collapse because of a variety of factors. Captive colonies in the United States shrank from 5.9 million in 1947 to 2.4 million in 2005.

Then, scientists finished mapping the honeybee genome and found that the insect did not have the normal complement of genes that take poisons out of their systems or many immune-disease-fighting genes. A fruitfly or a mosquito has twice the number of genes to fight toxins, University of Illinois entomologist May Berenbaum.

What the genome mapping revealed was "that honeybees may be peculiarly vulnerable to disease and toxins," Berenbaum said.

University of Montana bee expert Jerry Bromenshenk has surveyed more than 500 beekeepers and found that 38 percent of them had losses of 75 percent or more. A few weeks back, Bromenshenk was visiting California beekeepers and saw a hive that was thriving. Two days later, it had completely collapsed.

Yet Bromenshenk said, "I'm not ready to panic yet." He said he does not think a food crisis is looming.

Even though experts this year gave what is happening a new name and think this is a new type of die-off, it may have happened before.

Bromenshenk said cited die-offs in the 1960s and 1970s that sound somewhat the same. There were reports of something like this in the United States in spots in 2004, Pettis said. And Germany had something similar in 2004, said Peter Neumann, co-chairman of a 17-country European research group studying the problem.