Reagan chronicled his presidency in his diaries 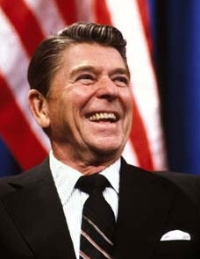 Reagan chronicled his presidency in his diaries

Former President Ronald Reagan had both stress of his work and frustration with trying to keep peace in his own family, according to a newly published compilation of his writings.

Reagan scoffed at the assertions of one-time chief of staff Don Regan that the president and his wife, Nancy, had relied on astrological advice in connection with Reagan's stewardship of national affairs. And he ranted in his end-of-day private writings about difficulties he was having with son Ron and daughter Patti.

"Tomorrow, I stop being president," Reagan wrote on Jan. 19, 1989, according to diaries in the custody of Nancy Reagan and edited by historian Douglas Brinkley for a book. Excerpts of the diaries, which Reagan kept during his two terms in office from 1981-1989, were published in the June issue of Vanity Fair magazine, which went on newsstands in New York and Los Angeles Wednesday.

Reagan's innermost thoughts were kept in a maroon leather books. The president made a habit of keeping them current, even taking a diary with him on his many overseas trips. His writing style was clear and concise, sometimes using abbreviations. He often referred to Democrats as "Dems," for example.

Reagan's diaries painted a picture of an uncomplicated, amiable president _ a man sometimes too easygoing for his own good.

Trouble with his kids was a painful experience that Reagan, who died at 93 in June 2004, often chronicled in his diaries.

He referred at one point in early 1987 to a call he made to then-Education Secretary Bill Bennett about Ron.

"Told him I was sure someone had apprised him of our son Ron's article on AIDS in People mag. Ron gave both of us h--l. He can be stubborn on a couple of issues & won't listen to anyone's argument. Bill volunteered to have a talk with him. I hope it can be worked out."

At another point, Reagan notes: "Ron called this evening all exercised because S.S. (Secret Service) agents had gone into their apartment while they were in California to fix an alarm on one of his windows. I tried to reason with him that this was a perfectly O.K. thing for them to do. ... I told him quite firmly not to talk to me that way & he hung up on me. Not a perfect day."

A few weeks later, Reagan wrote, "Nancy phoned --- very upset. Ron casually told S.S. he was going to Paris for a few days. I don't know what it is with him. He refuses to cooperate with them. (Redaction). I'm not talking to him until he apologizes for hanging up on me."

In an April 1984 entry, he wrote that "Patti screamed & complained so much we took the S.S. detail away at her request."

"Now, S.S. went to her & asked if she would accept it for no more than a week until they could get this information out of Lebanon & check the story (about an apparent threat). She said yes. But today's the 4th day & she's screaming again about her invasion of her privacy & last night she abused the agents terribly. I said take them away from her so she's again without protection. Insanity is hereditary. You catch it from your kids."

But Reagan also wrote frequently of his love of Nancy and how comforting that was to him.

A few weeks before he was shot in the 1981 assassination attempt, Reagan wrote, "Our wedding anniversary. 29 years of more happiness than any man could rightly deserve."

He also showed a keen sense of humor.

"Again spent the morning in the office --- returned for lunch & nap," he wrote about a month after the shooting outside a Washington hotel. "I must be getting better -- my naps are getting shorter."

Of the speech he gave that fateful day to an AFL-CIO audience, Reagan deadpanned, "Speech not riotously received. Still, it was successful."