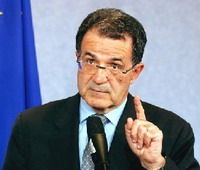 Some member states were freed to proceed with plans for a joint constitution as Prime Minister of Italy favored scrapping veto rights on key European Union decisions.

"To make progress, we have to do away with the right of veto," Romano Prodi said in a speech at the Portuguese Parliament during a one-day official visit to Lisbon.

"For the Union to grow, and grow stronger, we have to extend majority voting," he said, according to an English translation.

So far 18 of the EU's 27 members have ratified the proposed constitution, including Italy. However, others have balked at what they see as surrendering their sovereignty to European institutions.

The constitution currently requires unanimous approval from member states for it to take effect. It aims to streamline EU decision-making, enhance the bloc's international role and prepare it to accept more member states.

European leaders hope to break the deadlock of the past two years at a June summit.

Laying out his view of the stalemate, the former European Commission president said it was not always possible for 27 nations to proceed at the same speed on integration.

However, those countries unwilling to expand the EU's scope should not hold back others, he said. He cited the examples of the euro currency and the borderless European travel zone, each of which have been joined by 13 of the EU's member nations.

"Those who want to move forward must have the right to proceed at a faster pace," Prodi said.