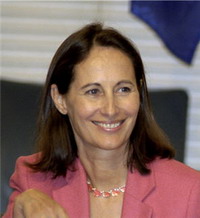 Both presidential candidates used the 1968 student and worker uprising - the defining moment in post-war France - in campaign rallies this week to illustrate the stark choice voters have between left and right in Sunday's runoff. The 1968 protests uprooted the way the French viewed authority, and themselves.

Front-runner Sarkozy brought "May '68" to the forefront of the campaign at a huge, high-budget American-style rally Sunday. He railed at length against the "leftist heirs of 1968." The law-and-order former interior minister blamed them and the unrest for a legacy of "cynicism" toward work and society and a sense of entitlement to the generous labor protections that he says are stifling French growth.

Royal, at an even bigger campaign concert Tuesday night, stressed what she called the benefits of the 1968 events, in a May Day speech stressing her commitment to those worker protections and the social safety net many French hold dear.

"At last ... salaries were raised, unions were recognized, university management was modernized, public liberties were enlarged and women received access to contraception and abortion," Royal said.

Royal, lagging in polls in her bid to become France's first female president, has made women's and family issues central to her campaign.

"I do not wish for France to reach such a state of blockage that it would provoke, as in May 1968, revolts that blocked everything simply because the powers in place refused to listen and refused to redistribute the riches," she said.

France is still grappling with the legacy of the would-be revolution of 1968. It started with protests at a university west of Paris demanding that women be allowed to visit men's dormitory rooms, and vice versa, and quickly intensified into an open revolt that took the stable and prosperous country by surprise.

Slogans included "It is forbidden to forbid," "If you meet a cop, smash his face," and "Never Work." Students burned cars, cut down trees with chainsaws and ripped up streets.

Royal suggested that Sarkozy was out to provoke a repeat of such unrest as an excuse for a police crackdown.

"He wants another May 1968 to reimpose order," she said Tuesday.

Sarkozy earned enemies as interior minister with harsh language toward youth troublemakers, and Royal has sought to make their presidential race a referendum on Sarkozy's persona.

One of the performers at Royal's concert, Michel Delpech, performed a song widely associated with 1968 to widespread cheers from the tens of thousands of spectators _ many born long after that seminal year.

Sarkozy stuck to his criticism of '68 after Royal's comments Tuesday. His UMP party noted that Royal declined to end her speech with the national anthem, as she has in the past, calling the move a nod to "the libertarian heritage of May 1968."

Sarkozy was 13 years old in May 1968. Biographers have described how the eager young Gaullist had wanted to take part in a large counter-demonstration, but his mother kept him home because he was too young.

Royal, who was 14 at the time of the uprising, wondered aloud why Sarkozy was focusing so much on the past.