President George W. Bush's veto of an Iraq war spending bill that set timelines for U.S. troop withdrawals puts new pressure on Democrats in Congress to craft a compromise even as their caucus grows more fractious on the topic. 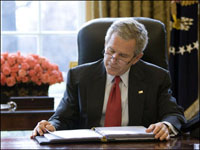 The party's most liberal members, especially in the House, say they will vote against money for continuing the war if there is no binding language on troop drawdowns. Bush and many congressional Republicans continue to insist on a spending bill with no strings attached on troop movements.

In only the second veto of his presidency, Bush on Tuesday rejected legislation pushed by Democratic leaders that would require the first U.S. combat troops to be withdrawn by Oct. 1 with a goal of a complete pullout six months later.

"This is a prescription for chaos and confusion and we must not impose it on our troops," Bush said in a nationally broadcast statement from the White House. "It makes no sense to tell the enemy when you plan to start withdrawing."

The standoff gives Republicans leverage, because even with the liberals' votes, Democrats don't have enough support to override Bush's veto. It will force Speaker Nancy Pelosi to seek more Republican help in drafting a new bill that Bush might accept, her allies and opponents say.

"I think the Democrats are in a box," Republican Rep. Eric Cantor said in an interview Tuesday. "We're pretty resolute on our side. We are not going to tie this funding to any type of withdrawal deadline or any type of redeployment deadline."

Some Democrats believe Republican solidarity will crack over time, noting that polls show heavy public support for a withdrawal plan.

Lawmakers in both parties agree that a workable compromise is a huge challenge in the coming days or weeks. Because Democrats control the House and Senate, the pressure is mainly on them to craft a bill that Bush will sign, and thus avoid accusations that they failed to finance troops in a time of war.

Many Democrats say a new spending bill must include so-called benchmarks for progress in Iraq that, if not met, would trigger movements of U.S. troops out of the country or perhaps to non-urban areas that see little sectarian violence. A new spending bill "has got to be tied to redeployment," said Rep. Rahm Emanuel, the House's fourth-ranking Democratic leader.

Emanuel conceded, however, that Democrats have yet to figure out where they will find the votes.

The situation frustrates Democrats, who won control of the House and Senate in an election that largely focused on Iraq.

Moreover, Democrats showed impressive solidarity in passing the bill that Bush vetoed Tuesday, losing only 14 House Democrats while holding 216. Top Democrats say they have no hope of replicating that showingonce they begin making even modest concessions in response to Bush's veto.

That makes them dependent on Republican help to some degree - perhaps a lot. As long as most Republican lawmakers stick with the president, "the question is how much policy and change we can push in Iraq," Emanuel said.

In his veto statement Tuesday, Bush again rejected the notion of an "artificial deadline" for troop withdrawals. But he added, "I'm confident that with good will on both sides we can agree on a bill that gets our troops the money and flexibility they need, as soon as possible."

Pelosi, who was to join Republican and Democratic leaders from both houses in a meeting with Bush on Wednesday, told reporters after Bush's remarks: "The president wants a blank check. The Congress is not going to give it to him."

Democrats will work with the White House, she said, "but there is great distance between us right now."

Numerous possible compromises are being floated on Capitol Hill, all involving some combination of benchmarks. Some would require Bush to certify monthly that the Iraqi government is fully cooperating with U.S. efforts in several areas, such as giving troops the authority to pursue extremists. Others would require an Iraqi-run program to disarm militias and a plan to distribute oil revenues fairly.

The key impasse in Congress is whether to require redeployments of U.S. troops if the benchmarks are not met. Many Democrats insist on it, and many Republicans vow not to budge.

"Our members will not accept restraints on the military," Republican House Minority Whip Roy Blunt told reporters Tuesday. He suggested tying benchmarks to continued U.S. nonmilitary aid to Iraq, an idea that many Democrats consider too weak.

Under another proposal being floated, unmet benchmarks would cause some U.S. troops to be removed from especially violent regions such as Baghdad. They would redeploy to places in Iraq where they presumably could fight terrorists but avoid the worst centers of Sunni-Shia warfare.

Senate Republicansshow a bit more interest in compromise than do their House colleagues, in part because several of them face tough re-elections next year in competitive states.

Senate Republican leader Mitch McConnell told reporters Tuesday that his party will accept benchmarks. But he declined to say whether he would agree to binding consequences if such benchmarks go unmet.

"You've asked me if there is an area where there's a potential common ground," McConnell said, "and I think benchmarks are a possibility."