New Jersey governor's wife is unaware of his being gay

The estranged wife of America's first openly gay governor criticized her husband during an appearance on "The Oprah Winfrey Show" stating she never knew he was gay. 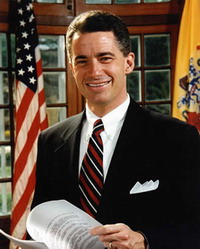 New Jersey governor's wife is unaware of his being gay

"He kind of gave me the news in cowardly installments," said Dina Matos McGreevey, who is in the process of divorcing former New Jersey Governor James E. McGreevey. She said she was shocked when she knew. "I just started to cry."

James McGreevey told the world in August 2004 he was "a gay American" and had an extramarital affair with a male aide. He resigned months later.

"I felt like my world had crumbled and my life was over," Matos McGreevey said. "In the course of the three days of his explanation and confession to me, it was clear to me that he never loved me."

Oprah Winfrey interviewed Matos McGreevey in a show that aired Tuesday, the same day "Silent Partner: A Memoir of My Marriage," was published by Hyperion Books.

In divorce papers filed recently, the former governor wrote that his wife "knew of my sexual orientation before our marriage" and "chose to either ignore it or block it out of her mind, even when questioned by her friends."

She stood with a frozen smile beside her husband when he made the announcement about his sexuality. Matos McGreevey said she was instructed to smile during that news conference.

"Silent Partner" is Matos McGreevey's response to her husband's memoir, "The Confession," which was published last September. In it, McGreevey described sexual encounters with aide Golan Cipel - who has denied having an affair with McGreevey - and wrote that he married Matos McGreevey to help him advance his political career.

In the fall, Winfrey landed an exclusive interview with McGreevey, who had been publicly silent since announcing he was gay.

McGreevey said he was not planning to watch his wife's interview and declined to comment on her statements.

The two are locked in a heated custody battle for their 5-year-old daughter.