The murder trial of music producer Phil Spector has been canceled for the rest of the week, but the judge scheduled a hearing without the jury to hear arguments on pending motions. 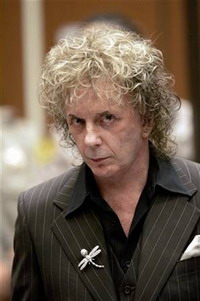 The court confirmed that the delay in testimony has to do with health concerns involving lead defense attorney Bruce Cutler.

Spector, 67, whose "Wall of Sound" transformed rock 'n' roll in the 1960s, is accused of murder in the Feb. 3, 2003, shooting of B-movie actress Lana Clarkson at his castle-like mansion in suburban Alhambra. Clarkson and Spector met at the House of Blues on the Sunset Strip, where she was a hostess.

Another member of the defense team, attorney Christopher Plourd, said, "There were some health concerns for Bruce which we think will be resolved and will be able to go forward next week."

He said that reports of problems with Cutler's medication for diabetes were essentially correct but declined to go into details about his ailment.

Plourd said he and attorney Linda Kenney-Baden were preparing a response to motions filed by the prosecution on Monday seeking sanctions against the Spector defense team for alleged discovery violations. He said the response would be filed Wednesday morning before the start of the hearing.

"They want us to be sanctioned and we're very concerned about that," said Plourd. "But in my opinion, there's not much of an issue. We misplaced some minor reports."

He said the defense would offer "a very strong response" to the claim that it withheld information that was discussed by forensic expert Henry Lee on a TV show during opening statements.

Prosecutors claimed that they were not told about a key opinion Lee will offer as an expert witness regarding the velocity of blood spatter, according to documents filed Monday.

"The result is that the jury has been given an incorrect view of the state of the case and the people's case may have been unfairly damaged," Deputy District Attorney Alan Jackson said in the filing.

Prosecutors say the music producer shot Clarkson, who was killed by a bullet through the mouth.

Jackson said Lee disclosed an unusual theory that blood spatter could travel 72 inches (183 centimeters) during a Court TV interview broadcast on the eve of a defense opening statement that utilized the same information. He said the prosecution was unaware of the defense theory until Lee was interviewed on Court TV.

By then, he said, the prosecution's opening statement had concluded and he could not address the issue before the jury.

Plourd said that documents which were ordered sealed by the judge would clear up the matter.

"They know all about this case. Both sides do," said Plourd. "It's kind of a tempest in a teapot."