Police arrested at least a dozen members of the banned Muslim Brotherhood group, including two lawmakers, as part of Egypt's ongoing campaign against the country's strongest opposition group. 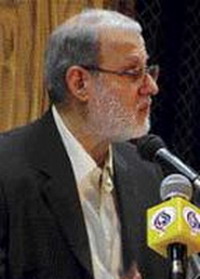 The Brotherhood posted a statement on its official Web site saying 14 members of the group had been arrested in the northern Nile Delta province of Menoufiya. However, the interior ministry issued a statement saying only 12 members were arrested for holding a secret meeting.

The Brotherhood has been banned since 1954 but has continued to operate and is Egypt's most powerful opposition movement. Its lawmakers, who run as independents, hold 88 seats in the 454-seat parliament.

Mohammed Habib, deputy leader of the Brotherhood, condemned the arrests on the group's Web site, saying they "reveal the despotic policy of the regime."

The ministry statement identified the arrested lawmakers as Sabri Amer and Ragab Abu Zeid, recognized by the Brotherhood as the bloc's most important parliament members from Menoufiya.

Mohammed el-Naggar, a Brotherhood attorney and member of the group, said security forces stormed the Brotherhood's parliamentary headquarters in the province, detained the members for several hours while their houses were searched and finally took them away in a police van.

The Brotherhood advocates implementation of Islamic law but says it wants democratic reforms in Egypt, where Mubarak has had a quarter century of authoritarian rule. The government accuses the group of seeking to take over the country and passed a series of constitutional amendments late last month that further curtailed the Brotherhood's ability to participate in politics.

Nevertheless, the group announced in mid-April that it would field 20 candidates in June elections for the upper house of parliament, known as the Shura Council.

The government's response has been to intensify its crackdown and has detained 43 of the group's members so far this month, not including Sunday's arrests.

Habib claimed the most recent arrests show that the Egyptian regime "seeks all the ways . . . to prevent the Brotherhood from running in the Shura council elections."

More than 300 Brotherhood members have been arrested in a crackdown since December, after Brotherhood students carried out a military-like parade. That prompted government accusations that the movement was forming an armed wing, providing students with combat training, knives and chains. The group denies forming a militia.

A military trial of 40 top figures from the group on terrorism and money laundering charges began Thursday under heavy secrecy, one of the largest such tribunals in years.