Scotland Yard has found fashion students to design the iconic bobby's uniform for the 21st century. 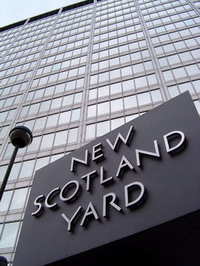 As part of the project, students will reassess the foot- (30 centimeter)- high bell-shaped helmets, which are made of cork and widely disliked by some frontline officers because they often fall off when chasing suspects.

"We will be working with the London College of Fashion to see how we can retain the traditions of the Met while ensuring our uniform is fit for 21st century policing," Roberts said.

Members of the public, police officers and the Metropolitan Police Authority will be asked for their opinions on the new design and a group of 50 male and female officers will test it, police said.

Julian Bennett from the British version of U.S. TV's "Queer Eye for the Straight Guy" suggested the students look to the French gendarmes' for inspiration.

"Their uniforms are absolutely remarkable. It's an all-in-one uniform, it's light, it's wearable, it's durable, you can run in it - you can do anything in it," Bennett told British Broadcasting Corp. television.

"If you look at a lot of the police uniforms ... they're so odd, the hats are horrible as well. I think a lot of the time when you see the police on the street they look terribly uncomfortable," he said.

Police forces outside London have already experimented with updating their uniforms. Strathclyde Police adopted black tee-shirts and cargo pants for beat officers five years ago. North Wales Police drew criticism in 2005 when it decided to replace officers' white shirt and tie for all-black turtle-necks and combat trousers. The design was called sinister and unfriendly.

The traditional helmet was scrapped in Scotland in the 1950s. Greater Manchester and four other English police forces tried a squatter, plastic police helmet in 2004, but most beat officers still wear the domed bobby helmet.