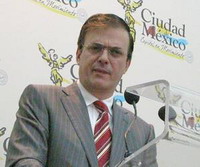 The church has vowed to continue its anti-abortion campaign even through it is under investigation for possibly violating Mexican laws forbidding the church's participation in politics.

As Mexico marked Children's Day on Sunday, the Archdiocese of Mexico said there was nothing to celebrate after Mexico City enacted a law legalizing abortion in the capital in the first 12 weeks of a pregnancy. Cheering abortion rights advocates greeted the law's passage on Thursday with shouts of "Yes, we did it!"

"We cannot understand the expressions of joy of some people who celebrate as a great triumph a decision that only represents pain," the Archdiocese said in an editorial published on the Internet, adding that "doctors who make possible the extermination of life, are betraying their own profession."

Archdiocese spokesman Hugo Valdemar Romero has said the church would not stop campaigning against abortion, even though the Interior Department said it is investigating whether prelates violated laws that forbid them involvment in politics.

"For the church, this is just the beginning," Romero said on Friday. "The Cardinal (Norberto Rivera) has promised the Holy Father to work earnestly in favor of life, and that work will be carried out intensely, not only by the Archdiocese, but all over the country."

Doctors and nurses who performed abortions and lawmakers who supported the legalization will be excommunicated, he said.

Mexico City Mayor Marcelo Ebrard maintaines that doctors at city-run hospitals cannot refuse to perform abortions even if they personally object to the procedure.

Ebrard appeared at a Children's Day parade on Sunday and said he would not be deterred by the church's statements.

"We are in the 21st century, not the 16th," Ebrard said. "I have a lot of respect for issues of faith. ... But this is a case where the affairs of state reign."

Elsewhere in Mexico, abortion is only allowed in cases of rape, danger to the mother's life or severe fetal defects. The only countries in the region that allow abortion are Cuba and Guayana.