After trying to run illegal immigrants out of town, just about everywhere Hazleton Mayor Lou Barletta goes these days, someone inevitably urges him to run for higher office: County commissioner. Congress. President of the United States. 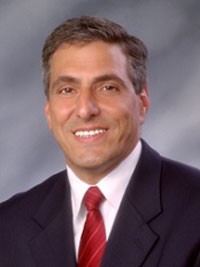 While flattered, Barletta said his only interest for now is winning re-election this year. The Republican mayor is seeking a third term, defying expectations that he would try to parlay his newfound fame as a crusader against illegal immigration into a higher post.

Republican activists say Barletta, 51, has a bright future in politics - if he wants it.

"Politically, he's done himself a world of good," said Republican media consultant John Brabender. "The real question is, where does he go from here, and what is the right office. But certainly he's put himself in a position to consider a number of offices."

Barletta rose to national prominence with his Illegal Immigration Relief Act, a first-of-its-kind crackdown that he proposed for his northeastern Pennsylvania city of 30,000 after four illegal immigrants were charged with shooting and killing a man. The measure, on hold due to a legal challenge, was approved last summer and emulated by towns and cities around America. It would penalize landlords who rent to illegal immigrants and businesses that hire them.

Anti-illegal immigration activists hailed Barletta's approach, and he quickly became a fixture on cable TV and talk radio, advocating his view that illegal immigrants are wrecking America and that local governments cannot wait for federal action to do something about it.

Despite his heightened political profile, though, Barletta said he is too busy defending the ordinance against the court challenge to run for higher office. Hispanic landlords and business owners have sued to overturn the law, and a federal judge is set to rule on its constitutionality after presiding over a nine-day trial last month.

"I want to see it through and not leave the people of Hazleton just because I may be able to get elected to a higher office," Barletta said.

That has not dampened the speculation about his intentions.

When Barletta delivered a speech at the National Press Club in Washington recently, he wound up meeting with officials from the National Republican Congressional Committee - stirring talk that he is planning a congressional run.

The mayor said he is not.

"He made it abundantly clear that he is focused on running and serving as mayor," said Republican committee spokesman Ken Spain. "We think very highly of him, but we also understand he has responsibilities and priorities he wants to focus on."

Despite his popularity, Barletta would face a difficult battle for Congress. The incumbent, 12-term Democratic Rep. Paul Kanjorski, has more than $1 million (EUR 730,000) in the bank, and the district is heavily Democratic. Barletta ran against Kanjorski in 2002 and lost by more than 13 percentage points.

Also, some Republicans worry that Barletta's message undercuts the party's efforts to woo Hispanic voters. One prominent Republican, Robert Nix, a Hispanic, vocally protested the choice of Barletta to deliver the keynote address at a recent meeting of the Republican State Committee in Harrisburg.

Barletta conceded his stance puts him at odds with some in his party. "But I believe they're losing the vote of the American people, the middle class who are affected by illegal immigration," he said.

Political observers say a run for statewide office, perhaps treasurer, might be a more likely scenario for Barletta than Congress. Indeed, Barletta has been spending lots of time traveling the state, speaking to numerous county Republican groups about his efforts to kick illegal immigrants out of Hazleton.

In an interview with The Associated Press, Barletta would not commit to serving out all four years of a third mayoral term.

"I never say never in the world of politics," said Barletta, a businessman who entered politics a decade ago and began his first term as mayor in 2000. "Times change, people change, and I would never rule anything out. I'm just not thinking of any other office right now other than mayor."

That may be a smart tactical move, said Tom Baldino, a political science professor at Wilkes University in Wilkes-Barre. By delaying a run for higher office, Barletta can avoid the charge that he targeted illegal immigrants to further his own political ambitions, and it also gives him time to develop a more rounded political persona, Baldino said.

Barletta faces only token competition in the May 15 Republican mayoral primary. His likely opponent in the November general election is former Mayor Mike Marsicano, who is unopposed for the Democratic nomination.