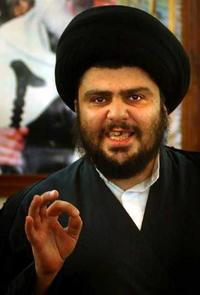 Al-Sadr's statement was read during a parliament session by his cousin, Liqaa al-Yassin, after the U.S. Congress ordered U.S. troops to begin leaving Iraq by Oct. 1. Bush pledged to veto the measure and neither the House nor the Senate passed the measure with enough votes to override him.

"Here are the Democrats calling you to withdraw or even set a timetable and you are not responding," al-Sadr's statement said. "It is not only them who are calling for this but also Republicans, to whom you belong."

"If you are ignoring your friends and partners, then it is no wonder that you ignore the international and Iraqi points of view. You will not benefit from this stubbornness," he added.

Al-Sadr led two armed uprisings against U.S. forces in 2004, and his Mahdi militia is believed responsible for much of the sectarian killing that pushed this country into civil conflict.

The U.S. military says he has fled to Iran, although his followers insist he is hiding in Iraq.

U.S. and Iraqi troops have been targeting his followers in a major security plan in Baghdad that began on Feb. 14. Hundreds of his followers have been detained and troops carry almost daily raids in his stronghold of Sadr City in eastern Baghdad.

In the statement, al-Sadr criticized comments by top U.S. commander Gen. David Petraeus and others who have warned of chaos here if U.S. forces leave.

"What chaos are you claiming will happen if you and the armies of darkness withdraw from our land? What chaos can be worse than the one we are passing through in Iraq where blood is being continuously shed," al-Sadr said.

"What freedom do you claim that you have spread in Iraq? Aren't you aware that the most simple freedoms were stolen from Iraqis, even their right to life, to become independent and unite? If you claimed that your pictures will be hanged in the homes of Iraqis they are under their feet today."

Al-Sadr said Bush had "damaged the West's image in the minds of the people of the east and if no one told you, I am telling you now. All this is because of your reckless acts," al-Sadr said.

"If a tower was destroyed in America, what is our guilt as Iraqis? If Saddam (Hussein) destroyed it, and this is impossible, he is in burning Hell now. If the terrorists did it then you are the one who opened to the gates of Iraq to kill us as you live in peace," al-Sadr said, referring to the September 11, 2001 attacks on the World Trade Center.

Al-Sadr praised those who carry attack against U.S. troops, calling them "honorable Iraqis not terrorists at all."

"The terrorist is the one who kills civilians whether a Shiite, Sunni and Christian and their weapons don't target your tanks or soldiers. This means that your withdrawal is a victory to Iraqis whose hands were only tainted by resisting you," he said.

On April 9, thousands of al-Sadr's followers marched in the Shiite holy city of Najaf to mark the fourth anniversary of the fall of Saddam's regime.

Earlier this month, the six Cabinet ministers allied with al-Sadr walked out of the government in protest after Prime Minister Nouri al-Maliki rejected calls for a timetable for the withdrawal of U.S. and coalition forces.