He stood out for his tenacious defiance of Soviet authorities and his decision to go into exile rather than give up the fight for human rights. Cellist Mstislav Rostropovich prevailed. 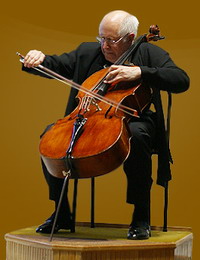 He returned home to Mother Russia.

Rostropovich was destined to be a cellist. His grandfather and father played the instrument. He is seen in one photo as an infant cradled in his father's cello case. He started on piano at age 4 and began playing cello at about 7, later studying with Semyon Kozolupov at the Moscow Conservatory.

When he played, he was mesmerized by the music. His fingers were elastic. Through the most difficult passages, they would move effortlessly up and down the fingerboard of his 1711 Stradivarius (the "Duport"). In the fastest sections, his bow hand would remain relaxed.

He would work tirelessly and sleep little, even in his 70s.

His electrifying playing and his charming personality were inspiring - not only to cellists and composers but to audiences and humanity. He greeted people with a trademark bear hug, huge smie and sparkling blue eyes. In his finest attire, he wore his trousers halfway between his waist and chest, like a Russian grandpapa.

"I think he actually played the clown a lot in order to make people comfortable," said David Finckel, who studied with him for nine years. "He was an incredible psychologist and he was able to manipulate situations and people to make them comfortable."

Pablo Casals made the cello into a solo instrument. Rostropovich expanded the instrument's repertoire by championing 20th century composers.

He helped bring about some 100 pieces, including Shostakovich's two cello concertos, Prokofiev's Sinfonia Concertante and Britten's Symphony for Cello and Orchestra.

"He always gave me the feeling that if I just tried as hard as he did, and that I loved it as much as he did, then I could do it, too," said Finckel, the Emerson String Quartet's cellist and co-artistic director of the Chamber Music Society of Lincoln Center.

Finckel was 11 or 12 when he first met Slava backstage at Carnegie Hall. In his teens, he would follow Rostropovich from city to city during his U.S. tours and go back stage afterward.

"I always had the same reaction, even up to the last time I heard him play - that I just wanted to run home and pick up my cello," Finckel said.

Eventually Rostropovich recognized him and agreed to mentor him.

"We had lessons in all the oddest places: backstage and in the hotel room, in green rooms, anywhere," Finckel said. "He never refused me ... and he never would take anything in return, not money, nothing."

Rostropovich would not teach the technical nuts and bolts of playing. Instead, he would talk about the music.

"My main intention is to get the composer's idea across," Rostropovich said in an interview in the October 1997 issue of Strad magazine. "I aim for the fantasy and the imagination of the composer."

When he conducted, Rostropovich recalled in a 2002 interview with The Associated Press, he would commune with the composer, especially while leading a piece by his teacher Shostakovich.

"His music brings his soul alive to me," Slava said. "Sometimes his face is telling me that maybe I'm conducting a little too slow, or a little too fast. And when I improve, the face disappears."

Cellist Glenn Garrick, who played under Rostropovich's baton at the National Symphony Orchestra, attended Slava's master classes for cello. At one, Garrick recalled in Strad, Rostropovich gave this advice to performers:

"The artist must forget the audience, forget the critics, forget the technique, forget everything, but love for the music. Then, the music speaks through the performance, and the performer and listener will walk together with the soul of the composer, and with God."