Blair to discuss EU future and constitution with Poland's leaders

British Prime Minister Tony Blair was expected in Warsaw on Friday for talks with Poland's president and prime minister on the future of the European Union and its constitutional treaty. 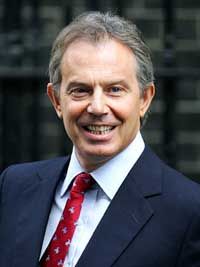 Blair to discuss EU future and constitution with Poland's leaders

Blair was coming for a few hours at the invitation of President Lech Kaczynski and was also to meet his twin brother, Prime Minister Jaroslaw Kaczynski who leads a socially conservative coalition government.

The leaders were also to discuss the military missions that both nations have in Iraq and in Afghanistan, as well as the situation of hundreds of thousands of Poles working in Britain, which opened its job market after Poland joined the EU in 2004.

European issues, including the stalled constitutional treaty, are to dominate the talks, the presidential press office said.

Many countries, including Britain and Poland, want to strip down the current draft text and scrap certain parts, notably the charter's name, which for many suggests the creation of a European super state.