Building collapses in Istanbul; 1 person rescued from under rubble

Rescuers who pulled one man from the rubble of a collapsed apartment building in Istanbul called off their search after concluding that nobody else was trapped beneath the debris. 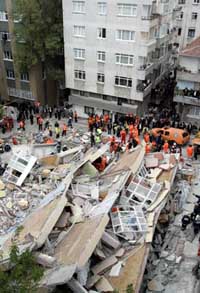 Building collapses in Istanbul; 1 person rescued from under rubble

Istanbul Mayor Kadir Topbas said the collapse Thursday was the result of "serious negligence" on the part of a contractor hired to tear down an old building next door. He said careless work had damaged the foundations of the apartment building.

The Anatolia news agency identified the injured man who was rescued as 33-year-old Ozkan Aysan, and said his legs had been trapped under a collapsed concrete column. Aysan reportedly entered the building to fetch his computer from his fifth-floor apartment, Anatolia said.

Residents had been evacuated from the building just before it collapsed, Istanbul Governor Muammer Guler said. The structure was at least six stories high.

"Cracking was heard about half an hour before it collapsed and it was evacuated to a large extent," Guler said.

Vesile Vural, 55, saw the collapse from her apartment across the street.

"There were construction workers working on a new building next door, we were watching that," she said. "Then the other building collapsed all of a sudden. In a second, everything was under a cloud of dust."

Rescuers in orange uniforms clambered over the rubble and sniffer dogs crawled through spaces in the wreckage, looking for possible survivors for about six hours until midnight. Rescuers appealed for quiet so they could listen for trapped people. Radiators, pipes, stoves and other household items protruded from the debris.

There was no indication that the building that collapsed was poorly constructed, with officials blaming the contractor who was working alongside it. However, shoddy construction has been blamed for several collapses in recent years - including those that killed many of the 18,000 victims of two massive earthquakes in 1999.

Several contractors who were charged with negligence for ignoring building codes escaped punishment in February when the statute of limitations expired in all unfinished cases that were filed in 1999.

In February, a five-story apartment building collapsed in Istanbul, killing two people and injuring 26 others.

Turkish rescuers often carry out earthquake drills in this sprawling city of more than 12 million, which experts believe could be hit by a huge quake sometime in the next 30 years.

Geologists have urged the Turkish government since the 1999 earthquakes to tear down some 50,000 buildings that would probably collapse if a big quake hit Istanbul. They say hundreds of thousands of other buildings that rise in an unstable mass of brick, mortar and stone need to be reinforced.