New Jersey governor gets injured for not wearing seat belt

A judge will review the complaint next week and decide whether to hold a hearing, which could lead to a $46 (33.7 EUR), said Roseanne Lugg, court administrator for Galloway Township, where the April 12 crash occurred. 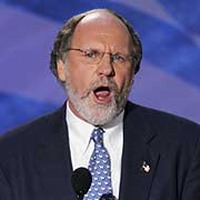 New Jersey governor gets injured for not wearing seat belt

Corzine was riding in the front passenger seat without a seat belt when his sports utility vehicle, driven by a state trooper at 91 mph (146 kph), crashed near Atlantic City. The governor has not been cited over the seat belt by police, who have 30 days to act.

No decision has been made on Corzine's case, state police Lt. Gerald Lewis said Thursday.

The citizen complaint was filed Wednesday by Larry Angel of neighboring Mullica, Lugg said. Angel did not respond to a phone message or an e-mail seeking comment.

Tom Shea, Corzine's chief of staff, has said the governor should be ticketed if he was not buckled up.

Corzine, 60, is recovering at a Camden hospital. He walked for the first time on Wednesday, two days after his condition was upgraded to stable. It remained unclear when he might resume gubernatorial responsibilities.