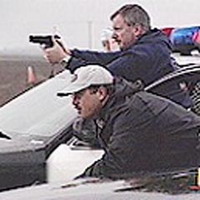 Officers with a no-knock warrant had raided the woman's home without warning on Nov. 21 after an informant said he had bought drugs from a dealer there. Kathryn Johnston, 92, died in an exchange of gunfire after the plainclothes officers burst in.

The case raised serious questions about no-knock warrants, which allow officers to raid homes where criminal activity is suspected without first announcing their presence, and whether officers followed the proper procedures.

Prosecutors said earlier this year that they intended to seek murder charges against three officers. The three also are expected to face federal charges.

Gregg Junnier and J.R. Smith were charged in the indictment with felony murder, violation of oath by a public officer, criminal solicitation, burglary, aggravated assault with a deadly weapon and making false statements.

Arthur Tesler is charged with violation of oath by a public officer, making false statements, false imprisonment under color of legal process.

Junnier's attorney, Rand Csehy, said his client would enter a plea soon but declined to say what it would involve. Tesler's attorney, William McKenney, said his client testified before the grand jury and expects to go to trial. Junnier retired in from the police department in January. Tesler and Smith are on administrative leave.

Tesler is "very relieved" not to face murder charges, McKenney said. "But we're concerned about the three charges." he said.

When officers raided Johnston's home, police say she fired a handgun and officers returned fire. An autopsy report revealed Johnston was shot five or six times in the chest, arms, legs and feet.

Narcotics officers said an informant had claimed there was cocaine in the home, but none was found.

Atlanta Police Chief Richard Pennington asked the FBI to lead a multi-agency probe into the shootout. He also announced policy changes to require the department to drug-test its nearly 1,800 officers and mandate that top supervisors sign off on narcotics operations and no-knock warrants.

To get the warrant, officers told a magistrate judge that an undercover informant had told them Johnston's home had surveillance cameras monitored carefully by a drug dealer named "Sam".

After the shooting, a man claiming to be the informant told a television station that he never purchased drugs there, prompting Pennington to admit he was uncertain whether the suspected drug dealer actually existed.