Keith Khan appointed head of culture for the 2012 London Olympics

Keith Khan was appointed head of culture for the 2012 London Olympics, and is responsible for a four-year program of activities throughout Britain. 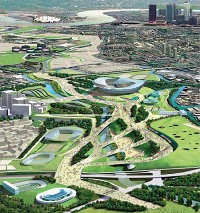 Keith Khan appointed head of culture for the 2012 London Olympics

Khan has produced costumes for London's Notting Hill Carnival and was also involved in the Millennium Dome's opening ceremony. He was the director of design for the Commonwealth Games ceremonies in Manchester, England, in 2002, and artistic director for Queen Elizabeth II's Golden Jubilee in 2002.

"I have a real passion about culture and creativity and its value to a wide audience," Khan said. "I know that with the full support of LOCOG (London Olympic organizers) and the unique cultural and creative sector, we will be able to take this Cultural Olympiad further than ever before."

Khan will work with director of culture, ceremonies and education, Bill Morris, and starts in June.

"Culture is absolutely at the heart of our vision for the Olympic Games and Paralympic Games in 2012," London chairman Sebastian Coe said. "We look forward to welcoming Keith to the team."

Olympic organizers are also seeking two more staff for the culture departmentone responsible for ceremonies, live sites and the torch relay, and a creative director for London's eight-minute segment during the 2008 Beijing Olympics closing ceremony.