Upbeat senior Iranian and Western envoys announced they would meet again in two weeks after making apparent progress in trying to break a deadlock over Tehran's defiance of a U.N. Security Council demand to freeze uranium enrichment. 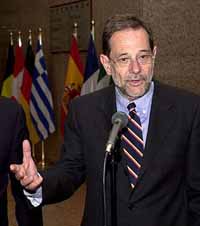 But a government official based in a European capital said the two touched on possible new discussions of what constituted a suspension of enrichment and related activities.

A new definition of an enrichment freeze acceptable to both sides was "the key issue," said the official, who was briefed on the outcome of the meeting.

There was also mention of a "double time out" - a simultaneous freeze of such activities in exchange for a commitment not to impose new U.N. sanctions, said the official who demanded anonymity in exchange for discussing the confidential information with The Associated Press.

"We will have some talks tomorrow and in two weeks," Larijani told reporters. He described Wednesday's discussions as "pleasant."

As he made his way to breakfast Thursday morning with Larijani and Turkish Foreigh Minister Abdullah Gul, Solana told reporters: "We had a constructive meeting but we will not be in a position to make a great breakthrough during the visit. But we hope we will be able to continue."

Other non-Turkish government officials had told the AP ahead of the meeting that the six powers negotiating with Iran - Russia, the U.S., China, France, Britain and Germany - may ultimately be willing to allow Iran to keep some of its uranium enrichment program intact, instead of demanding it be completely dismantled.

But all emphasized that the Ankara meetings were preliminary and meant only to establish if there was enough common ground for further talks between the two men that could lead to the resumption of formal nuclear negotiations between the six powers and Iran.

The "double time out" concept is supported by International Atomic Energy Agency chief Mohamed ElBaradei and is part of a confidential document shared on Wednesday with the AP.

The one-page document, based on a Swiss initiative, proposes that during such a double-moratorium "Iran will not develop any further its enrichment activities," and the six powers "will not table any additional U.N. resolutions and sanctions."

Diplomats said that the document is opposed by the United States, Britain and France but could nonetheless serve as the basis of a later agreement that could lead to formal negotiations.

Solana was expected to brief U.S. Secretary of State Condoleezza Rice next week, when he attends an EU-U.S. summit in Washington, as well as the foreign ministers of the other five major powers. They, in turn were likely to set ground rules for the next meeting between the two.

Iran is running more than 1,300 centrifuge machines at its underground facility at Natanz. Its ultimate goal is to run 50,000 centrifuges a year, enough to churn out material for a network of nuclear power generators - or a full-scale nuclear weapons program.

The U.S. might ultimately accept allowing a set number of centrifuges to remain assembled in series, but not running, a diplomat said. Iran, he said, would likely push for keeping the machines operating, if not producing enriched uranium.

The six powers also want to reduce the number of hooked-up centrifuges to less than 1,000.

The officials - some of them diplomats, others based in their capitals - were familiar with the discussions on Iran or specialized in nonproliferation issues.

With agreement to strive for a new definition of enrichment, Larijani and Solana may be able to sidestep a deadlock that for months has thwarted the resumption of negotiations over Iran's nuclear program, said the officials.

Iran's defiance of a U.N. Security Council demand to suspend all activities linked to enrichment - a possible pathway to nuclear arms - has led to two sets of sanctions against the country.

Iran argues the sanctions are illegal, saying it has the right to enrich uranium to generate nuclear power under the Nuclear Nonproliferation Treaty. Iranian officials say nuclear power is the only purpose of their program, rejecting suspicions that they ultimately want weapons-grade uranium for the fissile core of nuclear warheads.

But the United States and others say past suspicious nuclear activities, including a program Iran kept secret for nearly two decades, set the country apart from others that have endorsed the treaty.

September talks between Solana and Larijani foundered over the same issue. Solana, representing the six powers, demanded that Iran dismantle not only fledging enrichment efforts but all linked aspects, including assembling centrifuges for enrichment and facilities to house such plants. Iran refused.

Negotiations between Iran and the three European nations broke down last year when the Iranian government refused to suspend enrichment in exchange for a package of economic and political inducements, including help in developing a peaceful nuclear program.