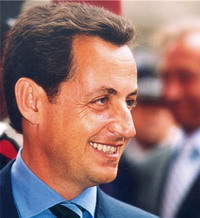 Nicolas Sarkozy, the front runner on the presidential race of France, said Wednesday that the EU constitution was dead and the 27-country bloc needed a better president.

Sarkozy told Le Monde daily that, after French and Dutch voters rejected the constitution in 2005 referendums, Europe should adopt new, stronger rules that allow it to "function better" - such as setting up the post of EU president.

"The Constitution prepared in an excellent way by (former French President) Valery Giscard d'Estaing is dead because the French said 'no' and the Dutch did too," the conservative Sarkozy was quoted as saying.

France's rejection of the EU constitution deeply shamed President Jacques Chirac, who had championed it, and effectively buried the document and stalled further European integration.

Segolene Royal, the Socialist who is Sarkozy's rival in the May 6 presidential vote, wants to negotiate a new EU treaty and subject it to a referendum. The French remain deeply divided over the EU's future.

Sarkozy said it would be "madness" to hold a new French referendum. He wants Europe to postpone the most controversial issues and adopt a new, simpler constitution through national parliaments by 2009.

Sarkozy said in the interview that he favored instituting a "modified unanimity" policy that would let member states defend their national interests, but not slow down decision-making by others.

Pierre Lellouche, a lawmaker in Sarkozy's conservative party who advises him on international affairs, told The Associated Press in an interview that Sarkozy's proposal was "the only reasonable and quick way out of the institutional crisis we are in" at the EU.

"He had the courage to say - 'Let's take the points we agree on, get them ratified through parliaments, so that Europe can move forward again,"' Lellouche said.

Sarkozy has a slight advantage over Royal in polls.