Thousands of people shuffled past the open casket of former President Boris Yeltsin. People were slowly walking by with tears in their eyes, lighting candles and crossing themselves to the sound of chanted Orthodox prayers as foreign dignitaries headed to Moscow to pay their last respects. 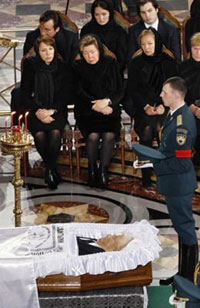 But many other countries were sending lower-ranked retired politicians and diplomats - a reflection of the funeral's quick timing but also perhaps of Yeltsin's uncertain legacy as unsteady democrat, Communist scourge and incomplete reformer.

Russians lined up under overcast skies to pass through metal detectors and the towering metal doors of the Christ the Savior Cathedral on the banks of the Moscow River. The gold-domed building is a replica of the original, which was blown up by the Soviet authorities in 1931, just a few months after Yeltsin's birth, and rebuilt during his presidency.

Inside, white-robed Orthodox priests chanted prayers and swung censers. Yeltsin's widow, Naina, and his two daughters sat dressed in black alongside the casket, which was draped in the Russian tricolor in the center of the cathedral's nave. An honor guard stood nearby.

Officials estimated that around 4,000 people had paid their respects by early evening.

"I followed Yeltsin as soon as he appeared, I followed him everywhere. ... He was the first honest and decent president," said Taisiya Shlyonova, a 75-year-old pensioner. The mourners were mostly middle-aged or older.

"There are good and bad things about him, but he will remain in history for his one great achievement: he buried communism," Alexander Bolshakov, a 44-year-old teacher, said as he waited to enter the cathedral.

The Soviet Union was an atheist state, so it seemed fitting Russia's first post-Soviet president was accorded religious rites. Though he made appearances at church services, Yeltsin was not regarded as an overtly pious man, but the Russian Orthodox Church was grateful for his support.

"By his strength, he helped the restoration of the proper role of the Russian Orthodox Church in the life of the country and its people," church spokesman Metropolitan Kirill said in a statement.

Yeltsin's burial Wednesday will also break with Soviet traditions. Unlike most of the leaders of the USSR, he will not be interred in the cold formality of the burial ground at the Kremlin walls; instead, his grave will be a plot at Novodevichy Cemetery, a leafy and comforting expanse next to Moscow's most famous monastery.

It is largely a burial site for dreamers and artists, rather than politicians, including writers Anton Chekhov and Mikhail Bulgakov and composer Sergei Prokofiev. It is also the resting place of Soviet leader Nikita Khrushchev - a maverick with simple tastes and often crude manners, like Yeltsin.

Yeltsin is widely remembered for his bold and principled stand against the 1990 hardline Communist coup attempt and for launching Russia on the path to political pluralism, if not a full-fledged democracy.

But he disappointed Russians by failing to bring political, economic and social stability to the nation. Many were outraged, as well, by his sale of the nation's industrial might and natural resources in shadowy auctions, by the disintegration of the public health care system and by pensions that turned to cinders in the fires of raging inflation.

Even among Yeltsin's supporters, some Russian blame him for leaving the country in the hands of President Vladimir Putin, whom critics accuse of undoing many of Yeltsin's democratic reforms - stifling free speech, creating a docile parliament and suppressing dissent.

"It's a complete retreat from democracy. Why do you think Yeltsin died? He couldn't handle that. Everything he fought for, nothing has been left of that," said Elena Mosolitina, a 65-year-old pensioner. "No freedom of expression, no freedom of protest, no real parliament, nothing."

A full list of foreign dignitaries attending the funeral has not been released, but many countries indicated they would send only middle-level officials - former prime ministers, foreign ministers or others.