Albanian Foreign Minister Besnik Mustafaj resigned from the post saying he was tired after an intensive period of work in the last 20 months. 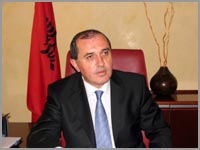 "I presented (my) unrevoked resignation to Prime Minister (Sali) Berisha," Mustafaj said at a news conference.

"I am tired. Tiredness is a reasonable motive," he replied when asked on the reason for his suprise resignation.

Mustafaj has been involved in intensive diplomacy on the future status of Kosovo, including visits to the United Nations in New York and numerous European capitals.

He has held the job since the centre-right coalition Democratic Party government of Prime Minister Sali Berisha took office in September 2005.

His last diplomatic mission was at a regional meeting on NATO integration in neighboring Ohrid, Macedonia.