The European Union informed the WTO that it will raise retaliatory sanctions against U.S. products because Washington continues to distribute anti-dumping funds. 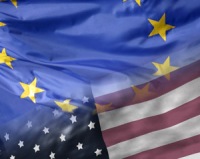 EU trade negotiator Raimund Raith said a 15 percent surcharge will be extended to 32 new categories of American exports on May 1 to penalize the United States for failing to halt payments to industries under a law known as the Byrd amendment.

The law, which allows American companies to receive proceeds from antidumping duties levied on foreign rivals, was ruled illegal by the WTO in 2002 and repealed by the U.S. two years ago. But in a compromise with companies, the Senate allowed for the distribution of funds to continue until October this year.

The EU complains that the payments could actually continue for many more years.

The 27-nation bloc "would like to ask again the United States if and what steps it intends to take to stop the transfer of anti-dumping and countervailing duties to its industry," Raith told the WTO's dispute settlement body.

He said the sanctions would be directed against U.S. paper products, plastics, textiles, pens, footwear and mobile homes. The measures will bring the total level of retaliation to US$81.19 million (EUR59.89 million), Raith added.

The Byrd amendment was approved in 2000 and hundreds of millions of dollars (euros) in payments have been distributed to producers of metals, food and other household items.

U.S. trade diplomat David Shark said a number of proposals have been introduced in Congress to bring legislation in line with WTO recommendations.

"It would be incorrect to suggest that nothing is being done," Shark said. "We would like to recall again that it is not always possible or appropriate to recount internal governmental efforts to pass legislation."

Japan, which was part of the same WTO case, said Tuesday it was unfortunate that the EU had to increase retaliatory measures.

"However, under the transitional clause, the illegal distribution continues and will continue for years to come," Japanese negotiator Koji Saito told the WTO, adding that Tokyo would maintain its current level of sanctions on U.S. products "in order to induce full compliance by the United States in this dispute."

The trade body authorized the EU and seven other countries in 2004 to impose penalties against Washington because of the amendment. More than US$380 million (EUR280 million) have already been distributed to American companies under the law, according to the EU, which says that US$113 million (Ђ83.3 million) of that sum were collected on its products.

Since May 2005, sanctions have forced Europeans to pay more for U.S. clothing, textiles, machinery, paper products and sweet corn, hurting sales for many U.S.-based companies.

The U.S. and the EU, the world's two largest commercial powers, insist that their trading relations are healthy. But they continue to appear at odds over how to liberalize farm trade as part of the WTO's six-year-old Doha round of global commerce talks.

In addition, the U.S. maintains WTO-approved sanctions against Europe over restrictions on hormone-treated beef, while Brussels continues to penalize Washington for the tax breaks it gives to American companies operating overseas.

Their ongoing battle over allegations of subsidies to rival plane makers Boeing Co. and Airbus SA has already become the biggest case in the WTO's 12-year history.