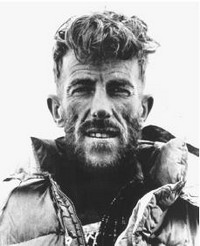 Hillary, 87, who climbed the world's tallest peak in 1953, is believed to have fallen during the weekend, the New Zealand Herald newspaper's Web site said.

It has not been disclosed where the fall occurred, but it was unlikely to have been during any outdoor pursuit. Hillary has been walking with the aid of a cane for several years.

His wife, Lady June Hillary, said in a statement Tuesday that Hillary was admitted to a hospital after the couple returned from a visit to Nepal's capital, Katmandu, on Sunday.

She said that she was "happy" with her husband's progress, and that he is "in a comfortable position and improves daily."

She made no comment on her husband's condition. He has suffered from altitude sickness in past years.

Other members of the famed climber's family, as well as the hospital, have declined comment.

Hillary had just visited the Himalayas, when he and Elizabeth Hawley - unofficial chronicler of expeditions in the world's highest mountain range for 40 years - met members of the 2007 "SuperSherpas Expedition" in Nepal's capital, Katmandu.

The SuperSherpas Expedition, led by residents of the U.S. state of Utah, hopes to make a historic all-Sherpa attempt on the summit of Everest next month to bring attention to the Sherpa people, who have been a part of every successful attempt on Everest. Many feel their role is under-appreciated.

"We were unbelievably surprised that Sir Edmund Hillary was there," Kehr said in the April 18 report. "We were honored when he said that this may be his last trip to Nepal."

Since first reaching the 8,850-meter (29,035-foot) summit of Everest, Hillary has donated millions of dollars (euros) to the Sherpas for building schools, hospitals, clinics, roads and bridges.

He has also helped pay for restoring temples and improving water supplies in the impoverished country.

Earlier this year, he was guest of honor at the opening of new facilities at Scott Base in the Antarctic, after helping construct the original New Zealand base during a 1957 expedition.

Hillary also was the first man to drive a vehicle _ an adapted farm tractor _ across the frozen continent to the South Pole.

He was knighted by Britain's Queen Elizabeth II for his Everest feat soon after the climb.

"There's no one we love more. I think the message from every single one of us is `hang in there Sir Ed, we love you,"' she told National Radio.

"Everyone will be thinking of Sir Ed, he's a national icon," she said.