China will overtake the United States as the world's biggest source of greenhouse gasses this year, a news report cited the International Energy Agency as saying. 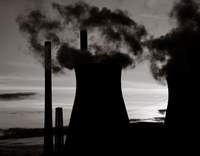 China had been forecast to surpass the U.S. in 2010, but its sizzling economic growth has pushed the date forward, IEA chief economist Fatih Birol was quoted as saying in an interview in Tuesday's Wall Street Journal newspaper.

"In the past couple of months, economic growth and related coal consumption has grown at such an unexpected rate," Birol was quoted as saying. China's rising emissions will effectively cancel out other countries' attempts to reduce their own, he said.

Birol's comments mark the direst prediction yet about China's contribution to global warming.

They follow the release over the weekend of a Chinese government report detailing the costs of climate change, but asserting that the country should focus on development before cutting greenhouse gas emissions.

Higher-than-average temperatures mean spreading deserts, worsening droughts, shrinking glaciers and increased spread of diseases, said the report, compiled by more than a dozen government bodies. Wheat, rice and corn yields could fall by up to 37 percent in the second half of the century, it said.

China is a signatory to the Kyoto Protocol on reducing greenhouse gasses, but it is exempt from its restrictions because it is a developing country.

China maintains that richer countries are responsible for the accumulated greenhouse emissions and should take the lead in cleaning up the problem.

However, Birol's remarks reflect rising concern both internationally and domestically over the environmental costs of China's soaring growth. Beijing last week said the economy grew by 11.1 percent in the first three months from the same period last year, defying attempts to slow down growth and ensure money is invested wisely.

China's heavy reliance on highly polluting coal for electricity generation have made it a major contributor to greenhouse gasses, mainly carbon dioxide, which are blamed for damaging the ozone layer and causing global warming.

Industries and urban buildings are far less energy efficient than those in developed countries and the massive growth of private car ownership has helped turn air in cities such as Shanghai and Beijing into a toxic soup.

In an article in the U.S. magazine The Nation this week, Elizabeth Economy of the U.S. Council on Foreign Relations wrote that Chinese officials are either unwilling or powerless to enforce environmental standards as a consequence of the regime's emphasis on development.

If current trends hold, China's greenhouse gas emissions will likely exceed that of all industrialized countries combined over the next 25 years, wrote Economy.

"In short, it's a nightmarishly bad picture," she said.

Beijing has made some efforts to boost efficiency, mandating that solar, wind, hydroelectric and other forms of renewable energy provide 10 percent of all power by 2010 and telling key industries to reduce energy consumption by 20 percent.

However, Birol said Beijing's refusal to place restrictions on greenhouse gas emissions undermines attempts to draft a new international treaty against greenhouse gasses to replace the Kyoto Protocol, which expires in 2012, he said.

"Without having China on board, without having them play a significant role, all these efforts, none of it, will make any sense," Birol was quoted as saying.

China has also joined the Asia Pacific Partnership on Clean Development and Climate which promotes renewable energy sources and cleaner ways to use coal but does not impose binding targets on member countries for reducing emissions.

Chinese Premier Wen Jiabao and Japanese Prime Minister Shinzo Abe this month also signed an environmental agreement that called for the countries to work on a successor to the Kyoto.