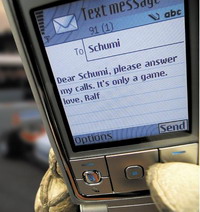 Thirteen-year-old Morgan Pozgar, of Pennsylvania, was named LG National Texting champion on Saturday after she typed "Supercalifragilisticexpialidocious" from "Mary Poppins" in 15 seconds.

Morgan estimated that she sends more than 8,000 text messages a month to her friends and family.