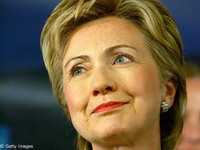 "Today is Earth Day, and I personally believe every day should be Earth Day," said Clinton. "We have a duty to protect God's creation and we have a responsibility to repair the damage that we do as we go on in life."

Clinton has plans to create a strategic energy fund, invest oil companies' "windfall profits" in renewable energy efforts and lead the United States to get 20 percent of its electricity from renewable resources by 2020.

Obama told people not to wait for their political leaders to tackle giant issues like climate change.

"It's not going to happen just because of some presidential candidate or because some bills are introduced in Congress," said Obama. "It's going to happen because the American people mobilize around the issue."

While former Vice President Al Gore has helped drive the debate with his film "An Inconvenient Truth," the increased level of interest in the presidential campaign is caused by a sense of urgency among the electorate on issues including climate change, Obama said.

Clinton said she has introduced a bill that requires federal buildings to save energy, and her campaign has even pledged to go carbon-neutral - using energy-efficient light bulbs and recycled paper in an effort to cut down on pollution.

Obama said he has offered specific proposals on the environment, ranging from toughening fuel efficiency standards to cutting back on carbon emissions. He said he was particularly proud of a proposal that gives automakers relief on paying retiree health costs, if they put the money back into producing more efficient vehicles.

"Earth Day provides us the opportunity to leave our children a planet that's cleaner, safer and more prosperous than we found it," Obama said. "In states like Iowa and California, people are taking the lead on producing fuels that contain less carbon."

Obama said if he is elected president, he will extend that commitment nationwide.