Owing to deadliest shooting spree in U.S. history, lawmakers want to eliminate a gap between state and federal laws that can allow someone with a history of mental illness to buy guns. 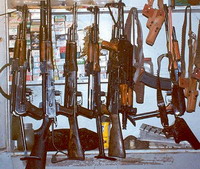 Members of Congress have shown little political appetite, however, for attempting to expand federal gun control in response to the massacre at Virginia Tech.

Seung-Hui Cho, who gunned down 32 people on campus and killed himself Monday, was evaluated at a psychiatric hospital in late 2005 and deemed by a judge to present "an imminent danger to himself as a result of mental illness." That should have disqualified him from purchasing a gun under federal law, experts say.

But Virginia court officials insist that because the judge ordered only outpatient treatment - and did not commit Cho to a psychiatric hospital - they were not required to submit the information to be entered in the federal databases for background checks.

Lawmakers pushed Sunday to eliminate such breakdowns. They called for uniformity between state and federal reporting to make background checks more dependable.

"I think everybody would agree that somebody with a psychological problem should not be allowed to purchase a weapon," said Senate Judiciary Committee Chairman Patrick Leahy.

Republican lawmakers appearing on the Sunday news programs agreed. "There was a definite failure of communication, and that ought to be changed with federal legislation," said Sen. Arlen Specter.

Two New York Democrats, Sen. Charles Schumer, and Rep. Carolyn McCarthy, announced legislation Sunday that would require states to upgrade their reporting of mental health records to the federal database. The bill would provide new money to states to help them automate their records, but also apply financial penalties on states that do not comply.

McCarthy, whose husband was fatally shot by a deranged gunman on the Long Island Railroad, is working with Rep. John Dingell, a Michigan Democrat and strong gun-rights advocate, to get legislation through Congress.

Meanwhile, Leahy said he would hold hearings on guns in response to the Virginia Tech shootings.

But Democrats, who now control both chambers of Congress, have shown little eagerness to toughen existing laws - or little confidence such efforts would advance. Such efforts have been unpopular with voters in rural or swing districts in the past.

Federal law generally requires firearms dealers to conduct background checks on gun buyers, and prohibits sales to convicted felons and some people who have been legally declared to have mental problems. State restrictions vary widely on weapons and waiting periods.

In Virginia, where Cho bought his guns, Attorney General Bob McDonnell said the disconnect between state and federal laws on background checks is something his lawyers are working to fix. He cautioned, though, against any federal response that would infringe upon individual rights.

Newt Gingrich, a former House speaker and potential Republican presidential candidate, suggested future tragedies could be halted if there were greater access for people to legally carry concealed weapons.

"There have been incidents of this kind of a killer who were stopped because, in fact, people who are law-abiding people, who are rational and people who are responsible, had the ability to stop them," Gingrich said.