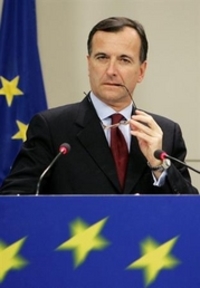 German Interior Minister Wolfgang Schaeuble, who chaired a meeting of justice and interior ministers, said they also backed plans for permanent joint patrols in late May in the Mediterranean and off Europe's and Africa's Atlantic coasts.

"Citizens expect Europe to provide effective protection of its common external borders," Schaeuble said. She called the decisions, which will be finalized over the coming months, "vital measures to counter illegal migration."

The decisions add to the measures the 27-nation bloc has already taken to help southern members Spain, Italy, Portugal and Greece cope with thousands of often poor and desperate African migrants trying to sneak into Europe.

Spain and Italy have pleaded with their EU counterparts to send boats, personnel and planes to try to stem the flow and rescue migrants on the high seas, many of whom set off on their dangerous voyage for Europe in rickety old boats.

Officials said an initial 450-strong rapid reaction intervention team of immigration experts and border guards will be set up by the EU's external borders agency Frontex in the coming months.

The agency will be responsible for deploying teams within days to any member state whose borders are under a particular threat by illegal migration.

The officers on the teams will enjoy legal powers to take immediate decisions in either processing asylum seekers or ensuring their return to their home country.

Officials added they were happy that Frontex would now have at its disposal 27 helicopters, 116 boats, and 21 airplanes donated from EU countries to conduct permanent patrols.

EU Justice and Home Affairs Commissioner Franco Frattini has urged EU nations to come to the aid of Spain and Italy.

Officials have said Spain, Italy, Germany, Finland and Greece had so far donated the bulk of the requested material and personnel.

EU ministers on Thursday also discussed backing their patrols with a satellite surveillance system to better monitor the borders.

Frontex and Spanish officials have said that for the first three months of the year increased EU patrols off the West African coast and repatriation and cooperation deals with African countries had seen the number of migrants arriving in the Canary Islands plunge to 1,905 from 4,498 for the same period last year.

More than 30,000 immigrants were intercepted last year while sailing from Africa to the Canary Islands in small, crowded boats, and officials in the islands say more than 500 died along the way.