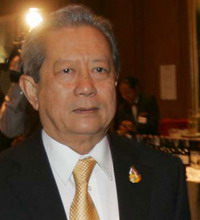 Buddhists living in the south of Thailand had to take up arms to protect their families against Muslim extremists. They have found support in Thai Government in this decision, the prime minister said Friday, despite spiraling fears of communal violence in the restive region.

The military meanwhile said the insurgents have introduced a new bombing strategy to fool the authorities and cause more casualties.

Buddhist civilians, including monks, have been the insurgents' prime targets in three years of violence in Thailand's southernmost Muslim-majority provinces - Yala, Pattani and Narathiwat - which has left more than 2,000 people dead.

Several government agencies have provided guns to civilians in the south - both Buddhist and Muslim - to protect their villages. But a proliferation of firearms and growing mistrust between Muslim and Buddhist communities has raised concerns of retaliatory attacks by Buddhists.

"Buddhists are taking up arms for self defense. The government is happy to support them for such a purpose," Prime Minister Surayud Chulanont told reporters during his one-day visit to the region.

While there is a regular rotation of soldiers through the area, police are expected to take permanent postings. The insurgents frequently target people they consider to be representatives of the government, especially teachers, soldiers and police.

Surayud went to a hospital in Narathiwat province to visit a high-ranking police officer, Col. Noppadol Pueksomon, who lost an arm and leg on Wednesday after stepping on a bomb buried in the dirt as he inspected the site of an earlier explosion.

The attack indicates that the insurgents are shifting bombing strategies, after the authorities cracked down on mobile phones which the militants had been using to trigger explosives.

"The insurgents have developed a new tactic for triggering bombs to escape the authorities' control," Col. Akara Thiprot said Friday.

Two other booby traps similar to the bomb that maimed Noppadol have been defused in recent months, Akara said, adding that the military will use mine detectors when inspecting bomb sites in the future.

When Surayud took office in October following a September coup, he pledged to make peace in the south a priority and to moderate the previous government's iron-fisted policies that critics said had fueled the insurgency.

But the violence has continued unabated and bombings and drive-by shootings are an almost daily occurrence.

In the latest violence, a bomb exploded as a military vehicle passed by in Pattani's Mayo district, injuring four soldiers, and a 76-year-old Buddhist man was severely injured early Friday in a drive-by shooting in Narathiwat's Rue So district.