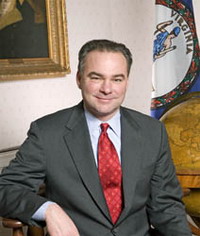 As experts were focused on Cho Seung Hui's somber writings and videotapes, parents of the killed students and official called upon to concentrate attention on the victims of the deadliest rampage by a lone gunman in modern U.S. history.

Virginia Gov. Timothy Kaine declared Friday a day of mourning and called for a moment of silence at noon to honor the 32 victims in Monday's massacre at Virginia Tech. Churches around the country, from California to the National Cathedral in Washington, D.C., have scheduled vigils and special prayer services.

"We want the world to know and celebrate our children's lives, and we believe that's the central element that brings hope in the midst of great tragedy," said Peter Read, whose 19-year-old daughter, Mary Karen, was killed. "These kids were the best that their generation has to offer."

Read urged television stations to stop broadcasting the gruesome, hate-filled videos and photos of Cho, the 23-year-old English major responsible for the attack. Major networks have pledged to scale back their use of the material.

As families began burying the victims, investigators worked on the evidence and looked into the warning signs in Cho's past, including two stalking complaints against him and a psychiatric hospital visit in which he was found to be a danger to himself.

Kaine on Thursday appointed an independent panel, including former Homeland Security Secretary Tom Ridge, to look into how authorities handled the tragedy.

Asked Friday if the attacks had been preventable, Ridge said his "preliminary judgment would be probably not," but he said he hoped the investigation would find ways to reduce the risk in the future.

"This is a national tragedy, and we have to learn some lessons and apply them," Ridge told "The Early Show" on CBS. "The last thing we want to do in our universities and public places is turn them into citadels or armed fortresses."

Cho's videos, which were mailed to NBC the morning of the killings, revealed a man angry at the world but offered little explanation of why, other than rambling tirades against rich kids, snobs and people who had wronged him.

As experts analyzed the disturbing materials, it became increasingly clear that Cho was almost a classic case of a school shooter: a painfully awkward, picked-on young man who lashed out with methodical fury at a world he believed was out to get him.

"In virtually every regard, Cho is prototypical of mass killers that I've studied in the past 25 years," said Northeastern University criminal justice professor James Alan Fox, co-author of 16 books on crime. "That doesn't mean, however, that one could have predicted his rampage."

When criminologists and psychologists look at mass murders, Cho fits the themes they see repeatedly: a friendless figure, someone who has been bullied, someone who blames others and is bent on revenge, a careful planner, a male. And someone who sent up warning signs with his strange behavior long in advance.

Among other things, the South Korean immigrant was sent to a psychiatric hospital and pronounced an imminent danger to himself. He was accused of stalking two women and photographing female students in class with his mobile phone. And his violence-filled writings were so disturbing he was removed from one class, and professors begged him to get counseling. Cho rarely looked anyone in the eye and did not even talk to his own roommates.

He described himself in his video diatribe as a persecuted figure like Jesus Christ. Cho, who came to the U.S. at about age 8 in 1992 and whose parents worked at a drycleaners in suburban Washington, also ranted against rich "brats" with Mercedes, gold necklaces, cognac and trust funds.

Classmates in Virginia, where Cho grew up, said he was teased and picked on, apparently because of shyness and his strange, mumbly way of speaking.

Once, in English class at Westfield High School in Chantilly, Virginia, when the teacher had the students read aloud, Cho looked down when it was his turn, said Chris Davids, a Virginia Tech senior and high school classmate. After the teacher threatened him with a failing grade, Cho began reading in a strange, deep voice that sounded "like he had something in his mouth," Davids said.

"The whole class started laughing and pointing and saying, 'Go back to China,"' Davids said.

Cho's great-aunt, who lives in South Korea, said Thursday that because he did not speak much as a child and after the family emigrated to the United States, doctors thought he may be autistic.

"Normally sons and mothers talk. There was none of that for them. He was very cold," Kim Yang-soon said in an interview with AP Television News. "When they went to the United States, they told them it was autism."

Regan Wilder, 21, who attended Virginia Tech, high school and middle school with Cho, said she was sure Cho probably was picked on in middle school, but so was everyone else. And it did not seem as if English was the problem for him, she said. If he did not speak English well, there were several other Korean students he could have reached out to for friendship, but he did not.

A 2002 federal study on common characteristics of school shooters found that 71 percent of them "felt bullied, persecuted or injured by others prior to the attack."

Cho "would almost be a poster child for the pattern that we saw," said Marisa Randazzo, the former chief research psychologist at the U.S. Secret Service and co-author of the study, conducted jointly with the Education Department.

Among the victims of the Virginia Tech massacre were two other Westfield High graduates, Reema Samaha and Erin Peterson. Both young women graduated from the high school last year, but police said it is not clear whether Cho singled them out.

Another expert who has worked with mentally disturbed young criminals suggested that Cho's actions probably had genetic causes.

"This is very different" from someone who was bullied to the breaking point - Cho was clearly psychotic and delusional, said Dr. Louis Kraus, chief of child and adolescent psychiatry at Chicago's Rush University Medical Center.

"This type of mental illness that this poor man had was not something that was likely precipitated by teasing or bullying," he said. More likely, he said, is that Cho had a biological psychiatric disorder that may have worsened in recent years because of the pressures of college life and his leaving the support of his family.

Fox, the criminologist, said Cho probably made the decision to go on a killing spree months ago based on his weapon purchase. That would explain why witnesses described him as remarkably calm when he did the shooting.

"There's a lot of scripting that's going on in their heads, a lot of planning. Once they've decided it, there's a certain degree of comfort and satisfaction that they'll be the last to laugh," Fox said.

Fox said there is typically a precipitating event that sets a gunman off. It is not yet known what that was in Cho's case.

"It may not be huge" to normal people, but to Cho "it was the final straw that broke the camel's back," Fox said.