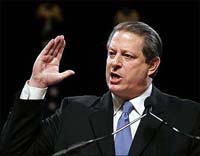 In the same news conference Thursday, Uribe disclosed that a prosecutor once questioned him about killings at a farm his family owned but said the property had been abandoned due to lawlessness in the region.

Gore's office informed conference organizers that he "would not attend the event because he could not share the stage with the president of Colombia after the political debates in Colombia against the Uribe Velez family and against the president," Uribe said in a hastily called news conference.

Editor Isaac Lee of the magazine Poder, which is sponsoring the conference, confirmed to The Associated Press that Gore's decision not to attend was related to the latest accusations against Uribe, the most serious to date.

Uribe called the news conference, carried live on all Colombia's major networks, to address a new set of allegations that while he was governor in a northern state in the mid-1990s he let paramilitaries use his property for meetings and killings and aided the militias' rise.

Considered terrorist groups by the U.S. government, the paramilitaries are responsible for some of the worst massacres in Colombia's long-running civil conflict.

Uribe took the opportunity Thursday to once again deny any involvement with the illegal right-wing militias, which originated in the early 1980s to protect wealthy landowners from kidnapping and extortion by leftist rebels.

The new attitude in Washington appears to have sunk Colombia's free trade agreement with Washington. It also could prompt a reduction in military aid to Colombia, which accounts for some 80 percent of nearly US$700 million in annual U.S. aid to the Andean nation.

Uribe alluded many times to what he clearly considered growing international questioning of his government.

"We are in a very delicate time for our country's greater good," said Uribe, accusing the political opposition of undermining him in visits to Washington that helped sink the free trade agreement.

The scandal reached fever pitch Tuesday when opposition Sen. Gustavo Petro, in a 2 1/2-hour presentation to Congress, claimed death squads reached a critical mass of power in the northern state of Antioquia while Uribe was governor, between 1995 and 1997.

In his speech, citing testimonies of former paramilitaries and soldiers, he said two farms owned by Uribe were used by the death squads as meeting points and even execution zones. He also demanded an investigation in to the president's brother, Santiago, who he said was implicated in the formation of a local militia called the 12 Apostles, which killed dozens.

Prodded to answer the question twice over the killings on the farm on Thursday, Uribe told journalists that the farm had been burned down by leftist rebels in 1995, when a loyal farm worker was killed, and the zone had become too dangerous for his family.

Uribe also reminded the nation that his father was killed by leftist rebels in 1983 on the farm trying to defend himself.