A series of strong earthquakes rattled southwestern Japan on Friday, prompting the government to warn of a possible tsunami that ultimately never came. 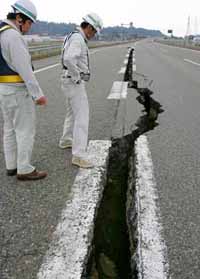 There were no immediate reports of major damage or injuries from the quakes.

The agency issued a tsunami advisory for southwestern Japan after an earthquake with preliminary magnitude 6.7 struck at 10:46 a.m. (0146 GMT), the Meteorological Agency said.

The notice covered islands around Miyakojima, part of the Ryukyu island chain that stretches southwest toward Taiwan.

A tsunami advisory is used when waves are forecast to be no more than 0.5 meters (18 inches) tall, agency official Yuji Nishimae said. The agency issues an alert when the waves forecast to be 1 to 2 meters (3.1 to 6.2 feet) high, and warns of a large tsunami when higher waves are expected, he added.

People living on the island were warned to stay away from the coast as a precaution.

"I could feel a little bit of shaking, but it wasn't strong enough to rattle cups on desktops and the like," local policeman Takumi Higa said.

Japan is one of the world's most earthquake-prone countries because it sits atop four tectonic plates. A magnitude 5.5 earthquake jolted northern Japan early Thursday, but there were no reports of injuries or damage.

Miyakojima, part of Okinawa prefecture (state), is about 1,830 kilometers (1,130 miles) southwest of Tokyo.