The Romanian parliament voted to suspend Romania's popular President Traian Basescu from office on grounds that he abused his powers. 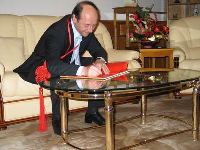 Lawmakers voted 322-108 in favor of the suspension. According to the law, parliament can suspend the president for 30 days and organize a referendum to impeach him from office.

More than half of voting age Romanians would have to vote in favor of the impeachment for it to pass, which would be virtually impossible, given Basescu's popularity and the usually low turnout in Romanian ballots. Polls indicate he would win a new term in office if new elections are held.

The president controls national security issues, but his powers are limited and he cannot fire Cabinet ministers or dissolve parliament.

Lawmakers have accused Basescu of 19 instances of constitutional abuse such as trying to usurp control of the Cabinet from the prime minister, criticizing judges and ordering the tapping of minister's telephone calls.

The Constitutional Court, however, ruled there was no evidence to back the charges and dismissed the lawmakers' accusations, but parliament is free to make its own decision regardless of the ruling.

Basescu has denied any wrongdoing and had vowed to resign immediately and run for a new term if parliament voted to suspend him.

The court reaffirmed the president's right to make political statements and call for reforms, including criticizing courts, the Cabinet and the political system.

The vote to suspend Basescu was "a bad solution for a bad situation," said Deputies' Chamber speaker Bogdan Olteanu, adding that the president should be impeached because he fueled political conflicts that threatened Romania's development.

Under Romanian law, the chairman of the Senate, Nicolae Vacaroiu, is to assume the president's duties while Basescu is suspended, or until a new election can be held if the president resigns or is impeached. Vacaroiu, who served as prime minister from 1992-1996, belongs to the opposition Social Democratic Party, which also governed the country from 2000-2004.

Hundreds of Basescu supporters gathered in the capital, with the president expected to join the rally later.

Social Democratic Party leader Mircea Geoana welcomed Thursday's vote, saying it was a warning to Basescu that he had to stay within the limits of the constitution.

On the other hand, Basescu's former party, the Democratic Party said the vote was a dangerous precedent weakening the presidency.

"This means any time a majority against the president forms in parliament he could be suspended," said Cristian Radulescu, a senior Democrat.

Basescu, who became president in 2004, is credited with helping to implement economic and social reforms that made it possible for Romania join the European Union on Jan. 1. However, he has been criticized for his outspoken dislike of Prime Minister Calin Popescu Tariceanu, with whom he had public arguments on national television.

While the two leaders, who headed together the anti-communist "orange alliance," had disagreements just months after coming to power, their conflict escalated after Romania's accession to the European Union.

After Thursday's vote, Tariceanu called on Basescu to honor his promise to resign. He vowed to press ahead with reforms and sought to reassure investors that Romania's economy and status won't be affected by political disputes.

"The government will prove that Romania is not blocked, that the country is going forward ... and is being governed according to its status as a EU member," the prime minister said.

On Wednesday, the president had warned that a vote to suspend him could have serious consequences for Romania, including a decrease in the country's rating by credit agencies and weakening its position in the EU because of the political instability it would cause.