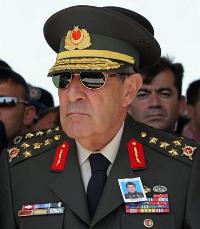 "It's our duty is to create a climate of trust. Within that climate, politicians can resolve the problems," Buyukanit said at the end of a two-day visit.

"Where there's a will, there's a way. And I think that will exists," he said. "It's clear that there is no hostility between the Greek and Turkish people ... It depends on how you look at the glass. I see it as half-full."

Buyukanit, in this northern Greek city for a security conference, startled his hosts Wednesday, when he flatly denied Athens' allegations of frequent air space violations over the Aegean Sea.

The dispute has led to frequent mock dog fights between Greek and Turkish air force jets.

On Thursday, Buyukanit visited the ancestral home in Thessaloniki of Mustafa Kemal Ataturk, the founder of modern Turkey.