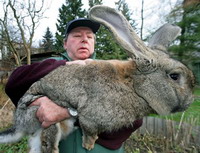 The reason of the traffic jam on a Hungarian highway was five thousands rabbits came free after the track carrying them crashed.

The animals came free after the truck - which was heading to a slaughterhouse - collided with another vehicle and overturned, police officials said.

The M1 highway - the main road connection between the capitals of Hungary and Austria - was closed for several hours in the morning while authorities tried to gather the loose animals but was reopened in the afternoon, Highway Patrol spokeswoman Viktoria Galik said.

Both drivers were unharmed in the accident but Galik said some 500 rabbits were killed.

By midday, 4,400 bunnies had been collected and taken away from the scene while 100 were still roaming the fields surrounding the highway.

The rabbits that were recaptured may be taken to the slaughterhouse soon, Galik said, but had no further details.